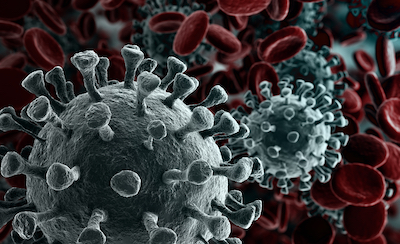 You probably know that a novel is a work of fiction — a story that's made up. So why are we seeing the word novel everywhere these days?

Just scan a couple of news articles, and you'll see the word novel attched to the word coronavirus, the virus strain that has sickened or killed tens of thousands of people, and confined millions more to their homes as we wait out the pandemic.

The backstory of the term novel is a fascinating etymological tale that actually involves another pandemic — one that happened 700 years ago.

Novus means "new" in Latin. A similar word, novellus, derives from novus, and means "young," "freshly created," or "not seen before." Used as a noun, novellus first meant "a new shoot of a plant," and also functioned the way we use the word news today: to describe recent information — the stuff that's happening in the world around us, right now.

Italian turned novellus into novella, and in the mid-fourteenth century that word was used to describe each of the ten stories in Bocaccio's The Decameron, a book that is widely regarded as one of the first major works of modern fiction. These ten stories are told by characters — seven women and three men — who have fled the city of Florence during a plague epidemic. The characters entertain each other during their quarantine in the country with made-up stories. The Decameron was so popular and influential at the time that it changed how the word novella was used. From then on, novella referred to works of fiction.

French versions of novellus also came about — nouvel, and novel — and novel is the word that eventually mae its way into English. But the story isn't over yet! The Italians added the literary meaning to novel, which made it the word of choice for describing a long work of fiction that we still use today. We also still use novella to describe a written work that's longer than a short story, but shorter than a novel.

You'll also see the related word novelty kicking around today, which is commonly use in a couple of ways. A novelty can be a little toy or trinket, something cute meant to entice you to buy it at a gift shop. But when something — like being stuck in the house all day — is getting really old, you might say that the novelty of the stay-at-home situation has worn off.

So, back to today's news... Why is the germ that's causing the current pandemic called a novel coronavirus? In this case, novel still means new, but in a specific medical sense: nobody has been exposed to the virus unti now, so virtually nobody has had a chance to develop any immunity to it. This means that it's really easy to become infected, and then go on to spread the virus to many other people.

Now that you've learned something about the fascinating origins of novel, if you're holed up in your room and looking for something else to do, consider reading the Decameron and take some comfort from the fact that millions of people throughout the ages have survived long quarantines before. Or, if you're really feeling ambitious, maybe write your own novel! Who knows — you may just end up creating The Decameron of our time.