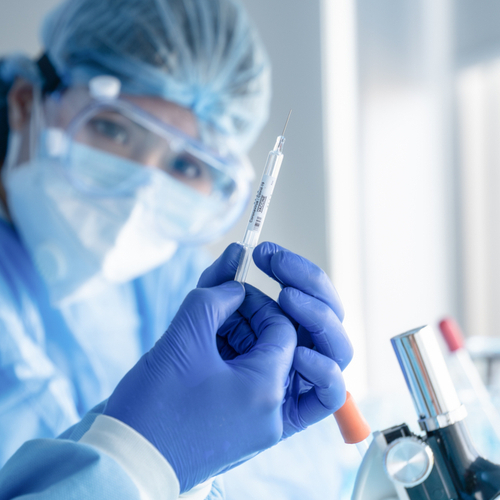 We hear all the time how normal, familiar public interactions — eating in restaurants, going to parties, hanging out with friends — will not be possible until there's a vaccine for Covid-19.

That makes sense, because until most people are immune to the disease it can spread quickly through the population, leading to the kind of sickness, loss, and devastating shutdowns that we've seen. Vaccines give people immunity to infectious diseases by teaching their immune systems to recognize and destroy a particular virus or bacteria, preventing infection and protecting everyone. But where does the word vaccine come from?

The Latin name for smallpox is variola. Its first recorded use was in the year 580, when Saint Gregory of Tours (in France) recorded an outbreak. Variola comes from varius, meaning "changing," "different," or "spotted." This last definition explains his choice, since the disease caused horrible pustules to form all over a person's body. As early as the 1500s, people in China began infecting themselves with cowpox, a much milder cousin of smallpox, because it conferred immunity against the far deadlier strain.

This practice began to take hold in Europe a couple of hundred years later, based on awareness of the Chinese discovery and backed up by local observations that farmers, especially dairy workers like milkmaids, tended to be immune to smallpox. The Latin word for cow is vacca, so the scientific name for cowpox is variola vaccina because vaccina means "of the cow." Edward Jenner, a British physician, coined the word vaccine in 1796, using it to describe this technique of injecting people with cowpox to confer smallpox immunity.

In 1881 Louis Pasteur suggested to the medical community that inoculations — another term for vaccines that we'll cover in a different article — generally should be known as vaccines. Since then, they have saved countless millions of lives by preventing many serious illnesses. Smallpox was the first disease to be eradicated globally through widespread vaccination; the last person infected with naturally occurring smallpox was a 3-year old child in Bangladesh in 1975. Polio, measles, tetanus, and other deadly diseases have been severely limited in much of the world by widespread vaccination, so there's good reason to be hopeful that Covid–19 will be added to that list.

40 Days of Solitude: The Origin Story of "Quarantine"