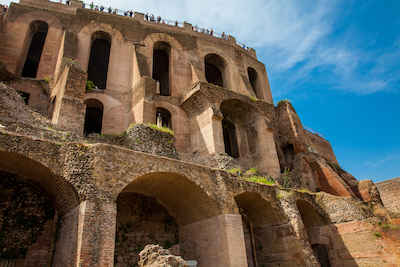 We're all spending a lot of time at home these days. This inescapable (literally) fact got us thinking about words for house and home.

Many of those words — such as domestic, domicile, domain, and even condominium — share a common root with a very long history: dom-.

Domus (δόμος) means "house" in Greek, and Latin borrowed it, but its origins go much further back in time: all the way to the stone age! Its root, dom, is Proto-Indo-European, the common ancestor of most languages from India to Europe, likely spoken from around 4500–2500 BCE. As a result, languages as different as Sanskrit, Russian, and Armenian all get their words for house or home from the same source.

In Latin, domus refers to a specific type of dwelling occupied by upper-class Romans. A domus was typically built around one or more courtyards, and grander examples had multiple stories and lavish decorations: statues, fountains, and frescoed walls. Our words atrium, vestibule, cubicle, and culinary all come from names for different rooms in a domus.

The most famous example is the Domus Aurea, or "golden house," a 300-acre palace compound built by the Emperor Nero in Rome. Fun fact: the Colosseum, which is right next door, got its name from the colossal statue of Nero that used to stand nearby. There's also a hilarious scene in Monty Python's Life of Brian featuring domus, involving a Roman centurion giving the title character an impromptu Latin lesson as he corrects the grammar of Brian's "Romans Go Home" graffiti.

With domus as its root, Romans used the word domesticus for objects and tasks related to the household, and after a trip through the French domestique, English got domestic. We use it to refer to things around the house, and also as the opposite of foreign: as in the Gross Domestic Product, our total national economic output. A well-known example is in the preamble of the U.S. Constitution, as part of the phrase domestic tranquility. Domicilium also comes from domus, and that's where we get domicile, another word for residence or home.

Dominus, meaning "lord" or "master," comes from domus, and was the title given to the head of a Roman household. Dominium means "property" or "ownership," and that's where we get domain and dominion. These two closely related words are often used to describe an area under the control of a king or other ruler. And dominate means "to rule over" or "control by mastery," which is what a monarch or dictator does. Condominium means "ruling together" or "joint sovereignty," which makes sense for a building where multiple families own apartments under one roof: each unit is its own little kingdom.

So as you survey your own domain — touring your domicile as you stroll from the kitchen through the living room and then back through the kitchen, stopping in the bathroom to make sure you're Zoom-worthy and then once more through the kitchen before giving up and returning to your computer to learn some vocabulary — take a minute to appreciate how a house, a basic human need, is so universal that billions of people have a similar word for it.

Click here to read more articles from Word Routes.
Blog Departments
Announcements Tips & Tricks
Editors Picks:
What's Old Is New Again: The Roots of "Novel"
April 14, 2020
40 Days of Solitude: The Origin Story of "Quarantine"
May 10, 2020
hone / home
April 6, 2011
Other Articles About
Fun
Support Summer Reading with Ready-Made Resources
May 21, 2021
Embrace the Clumsy Vocabulary of National Awkward Moments Day
March 18, 2020
Word Origins
It's Everywhere You Don't Want To Be: "Pandemic"
August 27, 2020
A Shot in the Arm: The Origins of "Vaccine"
August 12, 2020