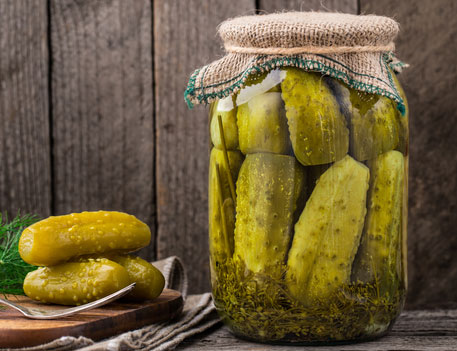 While we mean no disrespect to our brothers of the brine, we here at Vocabulary.com thought we'd take this opportunity to celebrate another kind of pickle, the kind we wordy-types relish. Not the edible cornichon or dill — but the metaphorical kind, as in the phrase in a pickle.  When you are in a pickle you are on the horns of a dilemma, trapped in a scenario you can't get out out of, in a spot of trouble. There's some pretty terrific vocabulary associated with bleak situations, so grab a gherkin and join us for an examination of the words related to this fun phrase.

pickle
Using the term in a pickle today evokes drowning in a salty sea with tons of other pickles in the same predicament. The history of the term calls up an even worse fate than being stuck in a barrel with other sodium-filled snacks. The use of pickle to mean "a sorry plight" predates the use of it to refer to a brined cucumber by almost one hundred and fifty years. Pickle originally referred to any sauce that was used to preserve meat and to make it more tasty, so to be in a pickle was to be served up, covered in sauce, about to be devoured. No one is sure where the word pickle comes from, but it was probably borrowed from middle Dutch at the beginning of the fifteenth century. By the beginning of the eighteenth century, the word had come to mean "cucumber preserved in brine", its most common definition today.

conundrum
A conundrum, which means a riddle or a puzzle, sounds like one of those words with a long, complex Latin history, and that's exactly the point — to sound like one, without actually being one. Conundrum is a word that was made up by Oxford University students in the 1590s when, without electricity, which meant no radios or televisions, never mind iPhones, scholars would amuse themselves by making words up in pseudo-Latin. Whatever its origin, conundrum is a very useful word and in this instance anyway, the scholars did a good job — the sound of the word conundrum evokes an impossible situation in a way that is almost onomatopoeic. See what you can accomplish if you unplug for a little while?

buffalo
You may be aware that there is a town in upstate New York called Buffalo, you may have even been there. They have a professional football franchise, the Bills, and up until a few years ago had a hockey team as well, the Sabres. You may also have heard of the animal kind of buffalo, a.k.a. bison. The verb buffalo is less well-known. It means to "be overwhelmed, overawed, with alarm," the reaction a slightly nervous person might have to being in a pickle. When you simply don't know how to handle or get out of a tight spot, you can say that the situation has you buffaloed. The verb probably comes from the fact that buffalo, as a herd animal, tend towards mass panic.

With all this information at hand, we are ready to confront what is often characterized as a linguist's favorite sentence:

Linguists love that sentence because it is the same string of sounds repeated eight times, but a keen reader or listener can make sense of it.  Here's a paraphrase of what it means:

Like the Oxford students in the sixteenth century before them, linguists sit around and think of these things just for fun. This sentence can certainly get you in a mental pickle if you think about it too much, though, so be careful.

discombobulate
Discombobulate is, like conundrum above, another word that someone just came up with, this time in the mid-nineteenth century, to perfectly embody a situation of being completely confused and deeply disturbed by your state of confusion. It is impossible to be combobulated, and important to point out that in terms of usage, discombobulated does not refer to everyday,  run-of-the-mill confusion.  Rather, confusion that leaves you discombobulated is not confusion you can just brush off — to be discombobulated is to be shaken to the core by something that doesn't make sense. If you pride yourself on being a great math student and suddenly find one day that you keep getting 5 as the answer when you add 2+2, that might leave you very discombobulated.

dilemma
The word dilemma refers to the type of situation where you have two choices, both of which are equally unfavorable or equally wonderful, and you just can't decide. Like pickles in a barrel or sardines in a can, you are stuck. Fortunately, the etymology of dilemma is not nearly so troublesome. It consists of di,"two," + lemma, "premise or thing proposed." The word lemma is still used today in branches of math, like logic, to refer to the statement you start with. The problem with a dilemma is that often one is forced to choose between the two options, and it is necessary to opt for the lesser of two evils or the least painful outcome.

dumbfound
This word is a good one to describe how someone appears when they are really puzzled, just absolutely amazed and mystified at how severely trapped they really are.  Dumb- in this instance refers to a meaning the word has had since Old English, "mute, speechless". (That's also the where the dumb- in dumbwaiter, those small restaurant elevators for food and dishes, comes from — because they worked on a pulley system they were relatively quiet.) The -found element comes from the second part of confound, a word which means "to mix up or confuse."

imbroglio
This word refers to an entire situation that is a mess, not just individual people in a bind. An imbroglio is a jumble, from the Italian word imbrogliare, which means "to confuse or tangle." Imbroglio is really only properly used if someone set you up in a big elaborate scheme, not just a jam you got yourself into. Imbroglios involve mistaken identities, revenge plots, accomplices — the stuff of major drama, not the trials and tribulations of everyday life.

When you've painted yourself in a corner, are in a fix, in a spot, in hot water, in the stew — when you've stirred up a hornet's nest and are all out of moves, perhaps there is nothing productive to do but talk about it, and that's why there are so many expressions for being in a pickle. So let National Pickle Day be a day to celebrate vegetables preserved in salt and vinegar, as well as an occasion to celebrate the everyday occurences of bravery, common sense and luck that get us out of a jam. (Ooh, is there a National Jam Day?)

Can't get enough? Dip into the whole barrel of words here:
In a Pickle: Words for When You're in Trouble