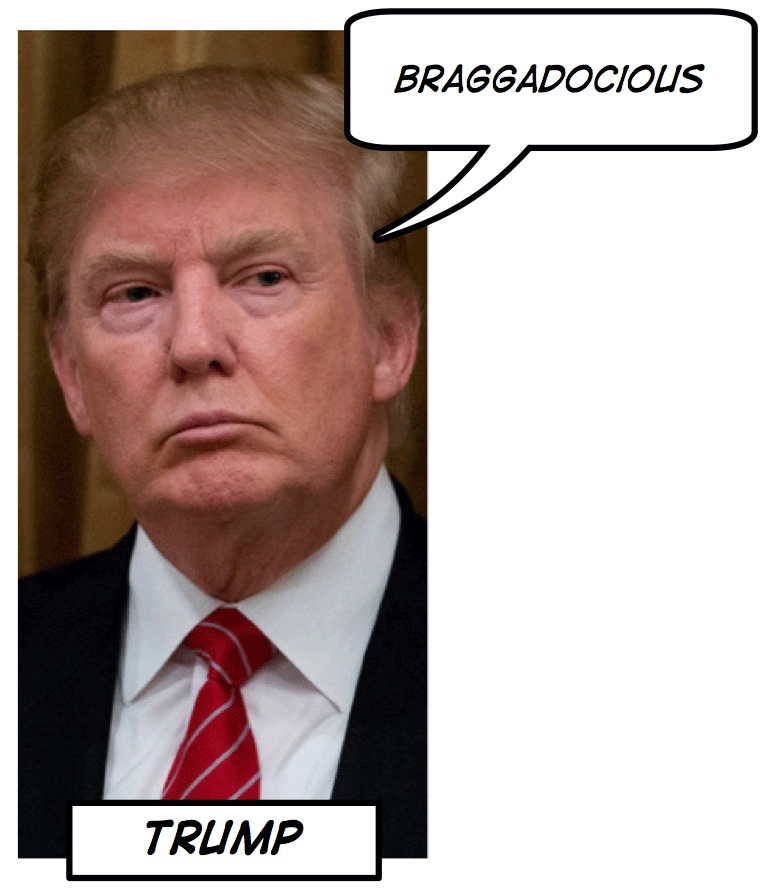 At the second Republican presidential debate, held last night at the Reagan Presidential Library and aired on CNN, the candidates jockeyed for the attention of primary voters. There are many ways of judging their performances, but what better way than to analyze their choice of words?

As with the first debate, Vocabulary.com has conducted a rapid-response survey of the candidates’ vocabulary, showcasing their most relevant words according to an analysis of the debate transcript. “Relevance” is determined by comparing the frequency of words used by the candidates with those words’ frequency in the Vocabulary.com corpus of texts. The corpus consists of 3.2 billion words from a variety of English sources, and it is continually growing with new sources added every day.

The analysis reveals some common themes related to serious-minded policy discussions: among the top relevant words overall were immigration and amnesty, autism and vaccine, destabilize and nuclear. But there were also some not-so-presidential words that Rand Paul might deem sophomoric.

So, before we reveal each candidates’ most relevant word, let’s first run down the nominees for the Least Presidential Vocabulary Item of the second GOP debate.

dude: Donald Trump used the word in responding to criticism from Chris Christie about his immigration policy: “ We have a lot of really bad dudes in this country from outside, and I think Chris knows that, maybe as well as anybody.”

patsy: Rand Paul complained, “Why are we always the world’s patsies that we have to go over there and fight their wars for them?”

And the winner of the Least Presidential Vocabulary contest is…

Right out of the gate, Donald Trump pulled off the vocabulary surprise of the night by declaring, “I say not in a braggadocious way, I’ve made billions and billions of dollars dealing with people all over the world.” Trump raised eyebrows by his use of braggadocious, an unusual adjectival form of braggadocio (“vain and empty boasting”) that the Oxford English Dictionary says is influenced by such words as ferocious, precocious, and atrocious. Carly Fiorina returned to the theme later on in the debate, when she said, in a not-so-veiled criticism of Trump, “Let’s talk about what leadership is. It’s not about braggadocio, it is about challenging the status quo, solving problems, producing results.”

Now, without further ado, here are the most relevant words for each candidate. The analysis was conducted using VocabGrabber, Vocabulary.com’s list-making tool, a component of the Vocabulary.com educational resources used in schools across North America and by millions of individuals worldwide. Users of the tool can take any text and instantly create a learnable vocabulary list with example sentences, ordered by relevance, difficulty, or where the words appear in the text. The list of the most relevant words for the candidates in the GOP debate can be found here.

“We should use offensive tactics as it relates to cyber security, send a deterrent signal to China… If we do that, it’s going to create a healthier deterrent effect than anything else I can think of.”

Jeb Bush used deterrent twice during the foreign policy portion of the debate. Several candidates mentioned the idea of going on the offensive to avoid conflict, using a display of might as a deterrent to further hostilities. Here, Bush mentions beefing up cybersecurity, and at another point, Ted Cruz invoked the principle of “Peace Through Strength,” a phrase which has ancient roots but is most often associated these days with Ronald Reagan.

“We’re talking about global jihadists who actually want to destroy us. They are an existential threat to our nation.”

Ben Carson used existential in an interesting way during the debate. The word is often associated with philosophical pursuits, such as questions of being, or of acting in the world, but that’s not how Carson uses it here. He is being much more direct when he says that ISIS is a threat to the very existence, the very lives, of Americans.

“ Every morning I get up, I veto 400 bills from a crazy liberal Democratic legislature, not one of them has been overridden. I’ve vetoed more tax increases than any governor in American history.”

Chris Christie used the word veto in his portrayal of himself as an “outsider,” based on his position as a Republican governor in the blue state of New Jersey. His use of veto helped to paint a picture of himself as the lone conservative with his finger in the dike, preventing a flood of liberal legislation.

Ted Cruz twice used catastrophic to describe the international agreement on Iran’s nuclear program, negotiated in part by Secretary of State John Kerry. Cruz’s hyperbolic choice of words serves as a dire prediction of the disastrous future that he sees transpiring as a result of the agreement.

“Problems have festered in Washington for too long... You know what a leader does? They challenge the status quo, they solve problems that have festered for a long time and they produce results.”

Carly Fiorina used fester in describing Americans’ perception of government and its problems. Fester isn’t just about having a problem; it’s about neglecting that problem until it grows even bigger, the way an untreated infection spreads throughout the body – or in this case the body politic.

“ The Supreme Court in a very, very divided decision decided out of thin air that they were just going to redefine marriage.”

Mike Huckabee used redefine to describe the effect of the legalization of gay marriage, returning to an idea that has been part of the same-sex marriage debate from the beginning: that somehow inherent in the word marriage is an understanding of who is to be married. Supreme Court justices themselves have reached for their dictionaries in writing decisions, though dictionaries have reflected cultural and political shifts by revising their definitions of marriage.

John Kasich used unify to describe how his approach to foreign policy would be to bring together America’s allies in a united front. But he also applied it to the home front, as an implicit criticism of his fellow Republicans for infighting rather than following the Reaganesque policy of staying positive and keeping the party united together.

“ I kind of have to laugh when I think of, ‘Mmm, sounds like a non sequitur.’”

Rand Paul defensively used non sequitur to refer to an attack by Trump, who suggested that Paul should not even be on the stage because of his low polling numbers. The Latin expression now firmly entrenched in English suggests a lack of logical sequence from one idea to another. Kasich also went Latin by using the phrase ad hominem. But CNN moderator Hugh Hewitt wins the Latin prize for using the legalistic phrase sua sponte, meaning “of one’s own accord.”

Marco Rubio clearly loves the word eviscerate. It was also his most relevant word in the first debate, making him the only candidate to repeat. This time around, he used the word to refer to how the present administration has gutted our military and deprived Americans of safety. “Gutting” is appropriate, as eviscerate literally means to remove the guts, or viscera, from something.

Donald Trump used assimilation in answering a question about the importance of speaking English in the United States. The candidates differed in regards to the necessity of assimilation in the lives of immigrants. Trump holds that assimilation must be accompanied by the use of English, whereas Bush and Rubio, while not discounting English, believe that American values can be communicated in Spanish, too.

“ Ronald Reagan wasn’t just a conservative Republican, he was an eternal optimist in the American people.”

Scott Walker ’s use of optimist positioned himself in the feel-good tradition of Reagan and his soaring rhetoric about America as the “shining city on a hill.” As with his fellow candidates, Walker accompanied that optimism for the future with expressions of despair for the current state of the country.

And finally, Vocabulary.com has also identified the most relevant words for the four “undercard” candidates in the preliminary debate broadcast earlier in the evening by CNN.

“ We’ve had one novice being commander-in- chief. Let’s don’t replace one novice with another.”

“Do we depend on proven conservative principles like Ronald Reagan did, or do we turn this over to a narcissist who only believes in himself? … I want to thank Donald Trump after I’ve criticized him for everything from being a narcissist to an egomaniac – one of the things he was right about was to say nonsense to the D.C. establishment.”

“ I’ll tell you a couple of things I’d do. I’d give the Israelis bombs called MOPs, massive ordnance penetrators. Give them to Israel. Let the Iranians know we’re prepared to work with Israel to make sure they never have a nuclear weapon.”

“I fought with President Bush to defend his nominees, to push even a filibuster, breaking the filibuster. I led that fight against someone who didn’t want to end the filibuster in order for us to get good, conservative justices.”

You can hear Vocabulary.com executive editor Ben Zimmer talking about some of the "not so presidential" words from the debate on NPR's Morning Edition.