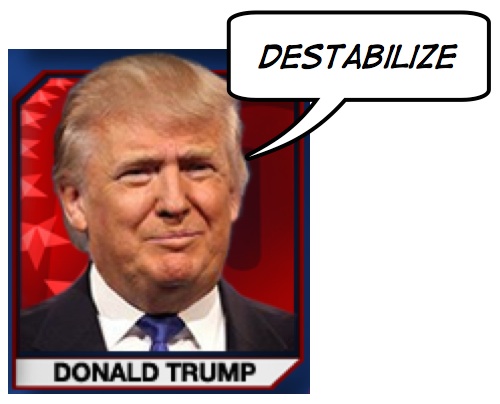 In a rapid-response survey of candidates' vocabulary in the first GOP debate, broadcast last night on Fox News, Vocabulary.com analyzed the transcript to identify each candidate's most relevant vocabulary word. And the data-driven approach yielded some interesting results about the candidates' language use.

Vocabulary.com executive editor Ben Zimmer shared the findings with the Observer. As Zimmer explains, the analysis determines "relevance" by comparing the frequency with which candidates used words in the debate to the frequency with which those words appear in the Vocabulary.com corpus of texts. The corpus consists of 3.2 billion words and covers everything from classic literature to the latest news.

"Overall, the most relevant word of the debate was amnesty, a potent buzzword in Republican arguments over immigration policy," he wrote, but otherwise, "The word's-eye view of individual candidates is quite varied."

While Donald Trump spoke of how he had predicted the Iraq War would destabilize the Middle East, Jeb Bush trumpeted Florida's school voucher programs. Some words had more of a rhetorical effect, such as Mike Huckabee's warning of burgeoning nuclear power in the world, Marco Rubio's comment on how federal legislation has eviscerated small businesses, or Rand Paul's disavowal of any animus toward Israel. Ben Carson suggested that religious tithing could be a model for taxation, and John Kasich spoke of lowered recidivism rates among Ohio ex-convicts. Carly Fiorina, the breakout star of the preliminary debate of seven additional candidates, promised that she would "lead the resurgence of this great nation."

Check out all the candidates' relevant words below, or click here to add them to your vocab-learning program.

Jeb Bush used voucher three times in one sentence, whereas the corpus finds it once every 4,181 pages of text. His repeated use emphasized how he values "abundant school choice." This use of the word, as something that can be exchanged for goods and services, is very recent, with 1947 being the first attested use, making it very likely the youngest use on the list.

"What I agree with is that we need a significantly changed taxation system. And the one that I've advocated is based on tithing, because I think God is a pretty fair guy."

Ben Carson used forms of tithe four times to refer to the Christian practice of donating ten percent of your income to your church. In our corpus, the word is quite rare outside of historical and literary texts.

"I'm the only guy on this stage who's put out a detailed, 12 point plan on entitlement reform and here's why — because 71% of federal spending right now is on entitlements, and debt service, 71%."

Chris Christie used the word entitlement three times in the debate. In our corpus, it appears once in every 6,840 pages of text, frequently in discussions of welfare and unemployment, which the out-of-work or those living in poverty receive by way of government entitlements, or welfare.

"But if they come illegally and they get amnesty, that is how we fundamentally change this country, and it really is striking. A majority of the candidates on this stage have supported amnesty. I have never supported amnesty."

Ted Cruz was certainly not the only candidate talking about amnesty, though his repeated use hammered home his longtime opposition to pardoning illegal immigration. Amnesty appears with medium frequency in our corpus (once in every 2,076 pages), in part due to news coverage of Amnesty International.

"The president can't tell you what we got. I'll tell you what the world got. The world has a burgeoning nuclear power that didn't—as the Soviets—say we might defend ourselves in a war."

Mike Huckabee gets credit for using a form of the verb burgeon. This fairly infrequent word (showing up only once in every 6,109 pages) helped make his point that the world's nuclear power is continuing to grow and his contention that the Iran deal will make the world "an incredibly dangerous place."

"We now treat them in the prisons, release them in the community and the recidivism rate is 10 percent and everybody across this country knows that the tsunami of drugs is — is threatening their very families."

John Kasich used recidivism, which means the tendency to return to a previous behavior, especially the rate of an ex-convict's return to crime. It has a wonky quality that fits Kasich's brass-tacks approach. It's also an unusual word that many people don't know; our usage tracker pegs it as likely to appear only once in every 42,980 pages of text, making it one of the rarest words in the debate.

"And last but not least, we need to repeal Dodd-Frank. It is eviscerating small businesses and small banks."

Marc Rubio, painting a vivid picture of what he feels a piece of legislation is doing to small businesses, used the word eviscerate. Literally referring to removing an animal's entrails and leaving an empty shell of a carcass behind, eviscerate is a strong word not encountered too often, once in 22,176 pages of text, in fact, but Sen. Rubio's use helps depict failing businesses that are now hollow husks of their former selves.

"Out of your surplus, you can help your allies, and Israel is a great ally. And this is no particular animus of Israel, but what I will say, and I will say over and over again, we cannot give away money we don't have."

Rand Paul used animus in the debate with its modern meaning of "ill-will," to indicate his friendliness to Israel. While the original meaning of the word in Latin is "rational soul," animus has been associated with bad feelings, or animosity, since the 19th century.

"In July of 2004, I came out strongly against the war with Iraq, because it was going to destabilize the Middle East. And I'm the only one on this stage that knew that and had the vision to say it. And that's exactly what happened."

Donald Trump, while adopting the role of the anti-politician, twice used a very political word destabilize. Our corpus shows destabilize often used in contexts such as a powerful nation undermining a vulnerable one. Occurring once every 9,057 pages of text, the word refers to things that are made to teeter, as some would argue Trump himself is doing to the GOP.

"To me, you terminate the deal on day one, you reinstate the sanctions authorized by Congress, you go to Congress and put in place even more crippling sanctions in place, and then you convince our allies to do the same."

Scott Walker's use of reinstate demonstrates that he wants to turn back the clock on the Iran deal and bring back the sanctions Congress had once authorized. Later in the debate he stated he also wanted to reinstate "the missile defense system that we had in Poland and in the Czech Republic."

But that's not all. Vocabulary.com also identified the most relevant words for the seven "undercard" candidates in the preliminary debate broadcast earlier by Fox News.

"We need a leader who will lead the resurgence of this great nation and unlock its potential once again."

"If I were the president of the United States, I would go and look at every executive order that exists right now and determine which ones want to be voided, because the president shouldn't be legislating: not through that vehicle or any other."

"She has empowered a failed agenda. She is going to empower a failed solution to an American economy dying to grow."

"I would do everything in our power not just to go after those who are here who we know who are here, before they can radicalize other Americans to carry out attacks, and it's not just the ones they've arrested."

"We can reform those entitlements, we can change that corporate tax code and lower it."

"It's a 20 percent flat rate tax, it'll take a blowtorch to the — to the IRS. It will create a manufacturing juggernaut in this country."

A word on methodology: The words were selected with no editorial tweaking from the Vocabulary.com analyst team. Rather, a transcript of each candidate's responses in the debate was fed into Vocabulary.com's list-making tool, a component of the Vocabulary.com educational resources used in schools across North America and by millions of individuals worldwide. Users of the tool can take any text and instantly create a learnable vocabulary list with example sentences, ordered by relevance, difficulty, or where the words appear in the text.

For more about our data-driven approach to word learning, read our white paper on The Science of Learning.

Update: We're not the only ones who think a wordy, corpus-based analysis puts an interesting spin on Thursday's debate. Our findings appeared in The Observer, as a listicle in Mental Floss, and as a fun quiz created by The Washington Post.