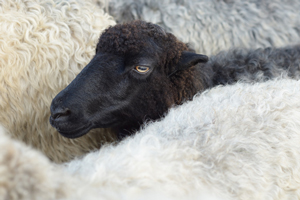 In a famous episode of Seinfeld—which aired so long ago I think I first saw it on a cave wall—George Costanza realizes his life is going nowhere.

He lives with his parents. He’s unemployed. He’s single, bald, and disheveled. Even worse, his inner compass unerringly leads him toward disaster. But as his friend/instigator Jerry points out, "If every instinct you have is wrong, then the opposite would have to be right.”

So George begins a radical new life plan. He declares, “Yes, I will do the opposite. I used to sit here and do nothing and regret it for the rest of the day, so now I will do the opposite, and I will do something!” In dating, job interviews, and movie theaters, George does the opposite—usually resulting in more honest, sincere behavior—and it works out spectacularly.

I wouldn’t recommend this plan to people who don’t live in a sitcom, but it is an outstanding demonstration of the primal appeal of opposites. In the spirit of Costanza and in honor of National Opposite Day (January 25), here are some words you’ll love or hate.

contradictory
If I said, “I will never eat another pizza again. I renounce all pizza!” while eating a pizza, my words and actions are contradictory. They’re opposed: they contradict each other. Most people don’t like to be contradicted, especially people in authority. If a teacher tells you the moon mission left behind a colony of robot dinosaurs, they probably won’t like it if you say, “Um, that doesn’t sound right.” Also, that teacher should be fired. Anyhoo, this word is related to diction (the words we use) and dictionary (where you can find those words). The contra part comes from Latin and is part of several words with an opposite, obstinate, contrary nature.

antagonistic
Antagonistic things are opposed to each other. Antagonistic muscles are literally opposed, like the bicep and tricep: extending your arm uses the tricep, but the opposite movement of curling your arm requires the bicep. An antagonistic remark is usually not just a contradiction, but a hostile one. A related word is often used when discussing fiction. In a movie, TV show, book, or other story, the main character is the protagonist. The person who opposes them—often a villain of some sort—is the antagonist. In the Harry Potter series and new Star Wars movies, the antagonists are the dastardly Voldemort and petulant Kylo Ren, respectively.

contrary
Things that are complimentary go together well, like peanut butter and waffles—er, jelly. But things that are contrary don’t go together well at all. If you had a house full of Christmas decorations in July, they would be contrary to the calendar. If you went to a funeral and were smiling and giggling, your behavior would be contrary to the solemnity of the occasion. When someone is about to propose an opposite point of view, they often start by saying, “On the contrary!”

polar
This word can mean chilly or frigid, just like the North and South poles, or it can take another meaning from the farthest reaches of the globe: opposite. If you’re on the North Pole, you can’t get farther away than the South Pole, unless you go to Mars, which is even less hospitable than the East Coast in winter. People often speak of polar opposites, such as horse manure and ice cream or politics and honesty.

paradoxical
A paradox is a statement or situation that says two things at once: it contradicts itself in some way, often to state a deeper truth. So a paradoxical notion contains its own opposite. The fact that life can seem long and short at the same time is a paradox. Many Zen koans—short riddles that are used in Buddhist meditation—are paradoxical. One of the famous ones is, “What was your face before your mother and father were born?” If you’re puzzling over that paradoxical concept, you have company with many Zen Buddhists. Think about it long enough and you might become enlightened or dizzy.

contraindicate
Another contra word, this one is mostly found in the world of medicine. Doctors talk about symptoms and diseases that contraindicate medicines and treatments. For example, if you’re allergic to Penicillin, that would certainly contraindicate taking any Penicillin. The root of this word, indicate, is more straightforward. If someone is yelling “Help!” then that indicates they’re in need of some assistance. You can also talk about indications and contraindications.

Another word used on Seinfeld meaning the opposite is bizarro, which comes from the name of a backwards-behaving Superman villain. In the Bizarro World, you should do your very best to never, ever learn new words, because words are just the worst.

Want to impress all your friends on National Opposite Day? Check out the vocabulary list Opposites Attract.