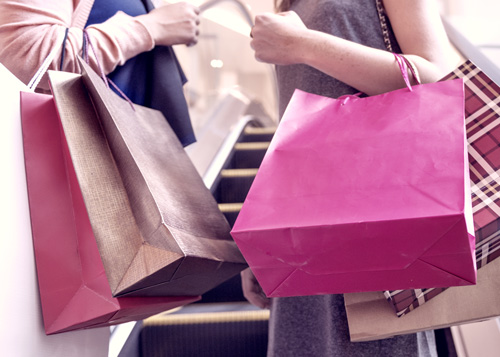 It's getting to be the holidays, a time that fills the world with the spirit of love, peace, family — and relentless, soulless, brain-melting consumerism.

Unless you've been living under a rock — and maybe even then, since the rock probably has a sponsor — it's hard to miss our collective obsession with spending money every winter season, as Thanksgiving's full bellies turn to Black Friday's open wallets. And if you forget to storm the mall like the thunder god Thor with "Immigrant Song" blaring on Black Friday, there's always Small Business Saturday and Cyber Monday.

So why not give your wallet a break and consume some words instead?

consumer
To consume is to eat, but when it comes to a capitalist society like ours, there's another important meaning: to buy, buy, buy. Consumers consume goods by buying them, and companies spend huge budgets advertising their wares to get you to purchase their products. You could call companies, large and small, producers, which is the opposite of consumers. Companies produce cars, books, internet services, food, makeup, TV shows, basketballs, fidget spinners, and all the other zillion things you can buy. If you have a problem with consuming more than you can afford, you might be a spendaholic or shopaholic.

budget
A budget is the money allotted to do something, whether for one person, a department of a company, a school, or an entire country. Any person or thing that spends money has a budget. A family has a budget that must account for food, clothing, housing, schooling, and emergencies. Every city and state has a budget, with separate budgets for areas such as police, education, libraries, roads, etc. The federal government has an enormous budget, and there's often a deficit: more money going out than coming in. So if you're not great at balancing your budget, you have something in common with Uncle Sam.

brand
This word has exploded in use in recent years, as companies and individuals talk endlessly about their brand. What's a brand? Well, if you're on a ranch, a brand is a mark on cattle. If you're in the marketplace, your brand is also a mark — it's the name of your company, along with people's opinions of it. If people associate good things (like quality and honesty) with your brand, it's good for business. If the reputation of your company is associated with dishonesty, lousy products, and terrible customer service, the brand has been devalued. Businesses that change names or come up with a new slogan or logo are rebranding.

possession
To possess something is to have it, so things you own are possessions. In a commercial society like ours, just about everyone wants to have more possessions, whether jewelry, video games, cars, boats, paintings, or anything else. Companies play on our desire to have more possessions with relentless commercials, while coupons and sales entice us to pile up even more stuff. People have insurance in case they lose their possessions, but some can't be replaced so easily, such as family heirlooms, old photographs, autographed books, and other items that are rare or full of meaning. You can't buy everything, though some folks try.

endorse
To endorse someone or something is to give public support. You hear about endorsing a lot during elections, as famous people and other politicians will give endorsements of candidates. If you say, "I endorse Lex Luthor," you're saying you want him to be elected. In the commercial world, endorsements are a little different: celebrities who do commercials for a product are endorsing it. Since they get paid for these endorsements, you might want to give some thought to whether the endorser actually knows anything about what they're endorsing.

Here's a word that does duty in the military, politics, and commerce. A campaign is a sustained, organized effort to do something. An election campaign encompasses all the efforts, from TV ads to fundraising to major speeches, made to get someone elected. A military campaign has a specific goal, such as destroying an enemy base or seizing some territory. In the commercial world, there are ad campaigns, which can feel as oppressive as the military type. If you're suddenly bombarded with ads for a certain movie or product, you can be sure they're in the middle of a major promotional campaign.

Buying is irresistible, but don’t bust your budget. Try accumulating words instead. They don’t take up any space, and you can’t beat free. Check out Material World: Shopping Lingo to stock up on more.