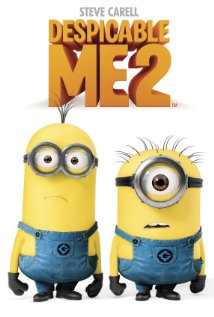 Anyone familiar with the children's movie Despicable Me 2 will not be surprised to hear that use of minion among children has grown by nearly 250 percent in the last year. Similarly, kids who play Minecraft are not immune to the charms of unusual vocabulary, and are using ocelot, nether, and spawn as never before.

This news comes from Oxford University Press, which teamed up with a BBC Radio 2 children's creative writing competition to analyze language in the 118,632 short story submissions the contest received.

Children's interaction with complicated vocabulary through television, film, and video games doesn't stop there. Vocabulary.com lexicographer Ben Zimmer wrote last week about the origins of movie villain names, focusing first on how the mal-  prefix in Maleficent signals to children the "evil" nature of the character, even as it lays the groundwork for them to unlock the meaning of words from "the same wicked family," such as malignant, malevolent, and malicious.

Why is this so important? Because when kids are learning words via media sources they delight in, they pass through a portal (a word kids know thanks to this year's The Lego Movie) into a world where kids are exploring words because they are interesting and fun. They're the dessert, not the broccoli and potato portion of the meal.

What happens then? Two examples from the OUP analysis give us an idea.

So whether they're getting scared silly by Angelina Jolie or they're going bleary-eyed in their second straight hour of building a city in Minecraft, let's let kids watch and play. They'll be bringing words home with them as souvenirs.