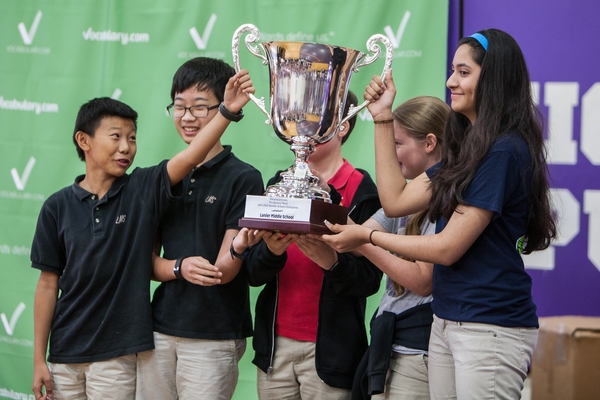 In the 2015-16 Vocabulary Bowl, middle-school students proved to be just as fierce competitors as their high-school counterparts. So, for the first time, we honored a winner in the Bowl's middle-school division.

Lanier Middle School claimed the trophy this year with more than 230,000 words mastered, coming in second overall to their fellow Houston school, Chavez High School. As Chavez did earlier this week, the Purple Pups of Lanier celebrated their achievement with an exhilarating event at the school.

With assistant principal Angel Wilson emceeing the festivities, the Lanier gymnasium was packed with excited students, not to mention their proud parents and teachers.

Houston's own Tamar Davis, a singer who once served as muse to Prince and more recently competed on NBC's "The Voice," followed up her Chavez appearance with an electrifying performance that ended in a standing ovation. Davis also spoke to the students about how her middle-school years shaped her.

Along with the trophy for winning the Bowl's middle-school division and medals for the top-performing students, Lanier also received a special certificate from Mayor Sylvester Turner's office commending them for their achievement of 230,034 words mastered.

In last year's Bowl, Midlothian Middle finished in second place overall and was the top middle school. Landing in the top three two years in a row is certainly an impressive feat for any school. As Principal Patrick Stanfield told us at their celebration last year, "The entire school got behind the vocabulary effort, and we are very proud of our students' achievement."

Midlothian Middle's success in the Bowl has served as an inspiration for other Chesterfield County schools. As Tomahawk English teacher Jodi Bullano told us, "We are looking forward to participating and competing in the Vocabulary Bowl next year! Vocabulary.com provides an effective program to enhance our vocabulary lists and build vocabulary skills for our students."

Rounding out the top five middle schools was Florida's Margate Middle (111,706 words mastered, 5th place). As you can read in Margate's Success Story, the students' excellent work in the Bowl, placing them at the top of the state leaderboard, has generated some local media attention.

Finishing right behind Margate was Maryland's Buck Lodge Middle (102,798 words mastered, 6th place). We've featured Buck Lodge in a Success Story as well, showcasing their dramatic improvement in literacy scores that has served as a model for other schools in Prince George's County.

Congratulations to the Purple Pups of Lanier and all of our top middle-school finishers for a job well done! Who will be the winning middle school in the 2016-2017 Vocabulary Bowl? Only time will tell!

Click here to read more articles from Announcements.
Blog Departments
Announcements Tips & Tricks
Editors Picks:
Houston's Chavez High School Celebrates Back-to-Back Vocabulary Bowl Wins in Style
May 9, 2016
The Results Are In: Students Master Over 14 Million Words in 2015-16 Vocabulary Bowl
May 2, 2016
How Houston ISD Boosted Literacy District-Wide and Dominated the Vocabulary Bowl
March 30, 2016
Other Articles About
Vocabulary Bowl
Join us for a Thanksgiving Break Away with Words Challenge!
November 15, 2021
Join Us for Opening Day of the '21-'22 Vocab Bowl Season!
September 17, 2021
Vocabulary.com News
Official 2020-2021 Vocabulary Bowl State Results
May 2, 2021
Final Buzzer Roundup: Schools Sprint to the Top of the Leaderboards
May 2, 2021