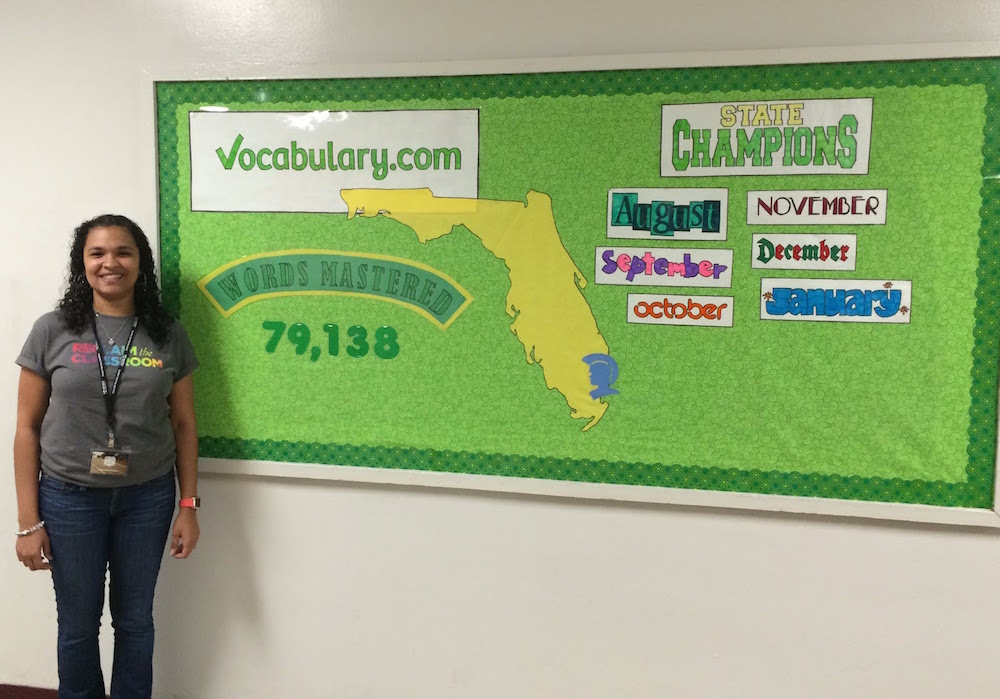 Vocabulary.com is paying off for schools around the country that are looking to make concrete gains in boosting student literacy. Our Success Stories showcase the vocabulary achievements that students and educators are experiencing.

Florida's Margate Middle School needed help with vocabulary instruction. When they started implementing Vocabulary.com, the students' success built excitement for learning and also made headlines in the local media.

CHALLENGE: A Title I STEM magnet school sees the need to boost literacy.

With a strong STEM-focused curriculum including programs in engineering, Margate Middle School recognized that it needed a tool that would boost student vocabulary and promote progress toward literacy goals. They looked for a resource that would be engaging enough for kids to play at home and during free time, but robust enough to have a meaningful impact on students' language ability.

According to Principal Earnest Toliver, Margate MS strives to be “on the cutting edge of 21st-century learning” in order to provide the most effective educational technology for a high-needs student population. The school sought a solution to their literacy needs that fit with this educational philosophy and helped to motivate students toward success.

After a one-month trial, Margate MS subscribed to the Vocabulary.com Educator Edition in the spring of 2015, incorporating Vocabulary.com into the school’s curriculum, and as part of before-school and Saturday extra support sessions Margate provides. Students quickly took to learning words from teacher-created lists as well as words personalized to their level through the game's adaptive capability. "One of the greatest strengths is that Vocabulary.com allows us to input the words we're already teaching in our classrooms. It goes along with our curriculum."

Margate quickly began to see evidence of their success on the Vocabulary.com statewide and national leaderboards. As Principal Toliver told Margate News in a story celebrating the school’s success with vocabulary learning, achieving mastery allows students to “fully understand all applications of the word." Toliver added that Vocabulary.com is “an academic game where they can apply what they learn in school,” but it is also addictive and fun. “The kids get really excited about Vocabulary.com,” he said.

The competition lit a fire in students' play. In April 2015, a month after students began using Vocabulary.com, Margate had already powered its way to the top of the Florida leaderboard and earned a fourth-place finish in the nation with nearly 20,000 words mastered.

Once Margate students began playing Vocabulary.com — and saw their success reflected on the Vocabulary Bowl leaderboards — they began playing during free time in school, at lunch, and at home. Margate News called out competition between Margate and "a nearby nemesis," quoting Principal Toliver as saying, “Lauderdale Lakes Middle is dying to beat us, but they’re not going to beat us.”

The benefits have gone beyond boosts to students academic vocabulary knowledge. A profile of Margate's achievements on the local television news station NBC 6 South Florida noted that Margate "tends to be overshadowed by its larger neighbors, Coral Springs and Pompano Beach." When Margate students see themselves successfully competing against local and statewide competitors on an even playing field, they can begin to believe that anything is possible. The NBC 6 profile singled out Margate’s performance on the Vocabulary Bowl leaderboards as “an example of how the students here strive for excellence.”

CONCLUSION: After students get a taste of success, their impressive word-learning achievements continue.

Not only are students beating expectations for word learning, Margate continues to excel on the Vocabulary Bowl leaderboards. In the 2015-16 school year, the school consistently places at or near the top of the Florida leaderboard and among the top ten nationwide, competing against approximately 16,000 other schools.

The students' initial success has motivated them to climb to even greater heights, and the school has publicized their achievements to the local community. In line with recommendations made in the Vocabulary.com PR toolkit, Margate parlayed word-learning achievements into local media coverage. Margate News ran an article in September 2015 under the headline "Margate Middle Tops State and Nation in Vocabulary Bowl," and the local NBC affiliate trumpeted the school’s Vocabulary Bowl success in a January 2016 feature titled, “Brag About Margate.” Margate also proudly announced news of its state leaderboard victory on the school website.

By challenging their students to competitive word-learning, and celebrating their achievements with the local community, Margate has used Vocabulary.com to build a thriving culture of success within the school.

This Success Story is also available in a PDF version. If you are a teacher or administrator and would like to explore the Vocabulary.com Educator Edition, have your school or district sign up for a free trial.