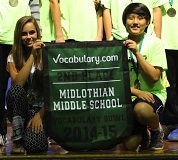 Over the course of the past academic year, students at Midlothian Middle School in Midlothian, Virginia mastered 213,181 words in the 2014-2015 Vocabulary Bowl, finishing well ahead of any other school in Virginia and earning a second place finish in the Bowl overall.

Did that long list of words mastered include "extraordinary"? It should have.

Because Midlothian's Bowl finish was no small feat. These middle schoolers beat out more than 200,000 students at more than 16,000 schools across the country, with the top ten word learners at Midlothian mastering between 1,000 and 5,400 words each. As eighth grader and top Midlothian word learner Obehi Obano put it, "Vocabulary.com is my Twitter. It's going to help me get into Harvard."

At a ceremony acknowledging Midlothian's impressive achievement on Monday, students, teachers, and staff under Principal Patrick Stanfield were presented with the Vocabulary Bowl 2nd place banner, medals for the top students, and special t-shirts. Two Midlothian alumni addressed the assembly: Omar Howard, a scholar-athlete currently enrolled at the University of Richmond; and Savannah Lane, who attends the University of Virginia and holds the title of Miss Piedmont. They spoke about getting serious about learning and facing adversity. The ceremony concluded with performances by the eighth grade jazz band and the school's cheerleading squad.

What was the secret to Midlothian's success?

Dorene Jorgensen, English department chair at Midlothian, found that the students' competitive spirit heightened their word-learning enthusiasm. She stoked the flames by staging creative contests to supplement vocabulary learning assigned in classes. She also publicized Bowl progress on multiple bulletin boards throughout the school and in morning announcements.

She kept the contests fun and tailored to student interest. Starting in January, students who achieved mastery on all the words on a Martin Luther King, Jr.'s "I Have a Dream" vocabulary list were invited to a special screening of the speech at which ice cream was served.

In a winter characterized by one snow day after another, online learning allowed vocabulary instruction to continue even when school was not in session, with Jorgensen assigning a list of Winter Words to students with the promise of "a treat, a certificate, and your name in the [morning] announcements" once school was back in session.

Students who mastered a list of five words associated with basketball were allowed to watch March Madness broadcasts during lunch. Her last contest challenged students with "100 Words Every Middle Schooler Should Know."

"The entire school got behind the vocabulary effort, and we are very proud of our students' achievement," said Dr. Stanfield. "Not only did students master lists assigned by English and content area teachers, they participated in contests to master thematic lists as well. We celebrated throughout the year with special events to recognize this extra effort and keep everyone moving forward."

"We had so much fun during the morning announcements — at first challenging other schools within Chesterfield County Public Schools, then tackling the large Texas high schools we were competing against," Jorgensen said. "We have a display in our front lobby keeping track of our standing in Virginia, among middle schools nationwide, and in the Vocab Bowl overall. We also have displays in classrooms and hallways recognizing top point earners and students who mastered contest lists. Our whole school was energized and enthusiastic about learning new words through Vocabulary.com!"

First place in the Bowl went to Chavez High School of Houston, TX.