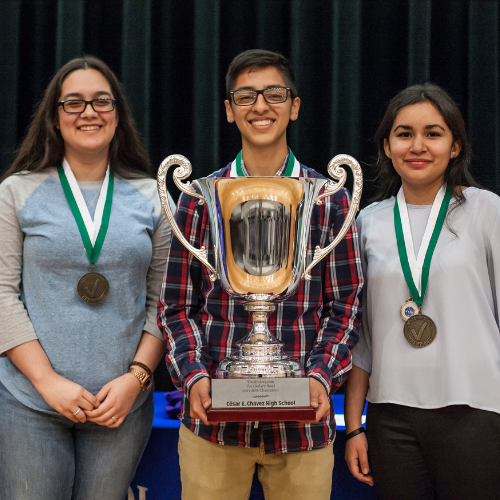 With only two months to go in the Vocab Bowl season, schools across the map are furiously racing toward the finish line.

The big story in the High School Division is American High School's meteoric rise to the top of the leaderboards. The AHS Eagles mastered 74,464 words in February to clinch their first-ever monthly championship! They posted a whopping 17,000-word lead over the four-time Vocab Bowl Champions, Etiwanda High School.

American High, located in Fremont, California is fairly new to the Vocabulary Bowl scene but has already made a huge splash in the 2020–21 season. The Eagles are currently perched at 7th place on the overall leaderboards. Compared to their finish at 1,720 place and 1,178 words mastered last year, and it's one of the most stunning surges in word learning the competition has ever seen.

The Eagles are also soaring to the top of their state leaderboards, sitting pretty at 2nd place in California. And in a Vocab Bowl hotbed like California, with fierce competitors like Etiwanda, Mater Dei, Rialto, and Buckingham Charter, that's no small feat. We'll be keeping a close eye on them as they fly into the final two months of the season.

Congratulations to Harris Road Middle School in Concord, North Carolina, who continued their fast and furious winning streak in February by mastering 30,216 words! This is the Patriots' 3rd straight monthly middle school championship title, and they show no signs of slowing down.

Perhaps that's because this is their year to finally claim the overall Middle School Champion title. Last season, Harris Road finished in 6th place in the Middle & Elementary School Division, but their February win propels the Patriots into prime position on the 2020–21 leaderboards!

Harris Road has surpassed the early Middle School front-runner, McKenzie Middle School, but the season isn't over yet! There are still two months until the final buzzer sounds on April 30, and it's too early to count anyone out of contention. Great Neck North is holding steady in 3rd place, and a wave of South Florida schools is washing over the Top 10 ranks. Keep an eye out for Bowl Behemoths from Pines Middle, Hialeah Gardens, Margate, William Dandy and Indian Ridge to make a surge in the final weeks.

Schools across the map are invited to compete in a special One-Day Challenge! To celebrate March Madness, The Vocabulary.com team is throwing down the gauntlet to see which school in each division can master the most words in 24 hours.

Each school that finishes March 17th at the top of their division leaderboard will be crowned the March Madness Champions. That's a claim to fame which will earn them an official Vocabulary Bowl achievement certificate and hefty bragging rights.