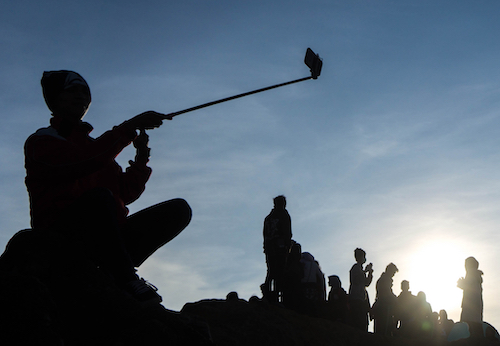 These days, you'd have to live in a cave on the moon to not be aware of selfies.

We all have that one friend who posts a dozen selfies a day, which seems, to put it mildly, a bit much. Fair or not, the selfie is associated with some less than flattering concepts: being vain, egotistical, superficial, and self-obsessed. Still, it’s not like people haven't been taking self-portraits as long as cameras and paint have existed. Vanity isn't a new development, but social media makes it feel fresh, and old people love to dump on the young, which is bad news for the young, until they also wither into a complaining pile of dust and the cycle begins anew.

Anyhoo, June 21 is National Selfie Day, so it’s a fine time to look at words for folks who can't stop looking at themselves, photographing themselves, and posting themselves up and down and around every one of the internet's tubes.

Want a bigger portion than the sampling that's offered below? Check out Face It: Selfie Vocabulary for more words and activities.

preen
This word, around since the late 1300s, applies to people and birds. In both cases, preening is an attempt to look your best. A bird preens by cleaning and smoothing its feathers. A person preens by obsessively fixing their hair or clothes. A preening person, fittingly, is sometimes called a peacock.

vainglorious
This word practically defines itself. The vain are preening folks obsessively concerned with their appearance. The vainglorious are the same, but with a heightened element of self-love: vainglorious people bask in their own glory. Vainglorious has been turning up in English since the 1500s, while it’s first ingredient vain is a few hundred years older. This word is a compound, much like recent coinages such as humblebrag and deepfake.

primp
Have you ever seen someone looking at themselves in their mirror or phone, plucking and poking at their hair, over and over again, trying to achieve that perfect look that will win them true love — or at least 100 likes? That's primping. When primping, you preen, you straighten, you adjust, you readjust, and you keep working on your appearance until you achieve perfection (or your hands get tired). Primping has a connotation of vanity, which makes it fit right in with these other words, but hey, there's nothing wrong with looking your best. Just don't primp so much you strain your primping muscle.

pompous
A pompous person is full of themselves, not necessarily in terms of their appearance, but their importance. If you want to see some pompous stuff, look at any country that still has royalty. Kings, queens, dukes, lords, and the rest are about as pompous as it gets, and a palace is the most pompous home of all, practically screaming "I'm important!" Related words are the nouns pomposity, pompousness, and the concise pomp. A common expression is pomp and circumstance, which refers to a particularly pompous and pretentious hullabaloo.

egomaniac
Egomaniacs are egotistical — they are egotists. An egomaniac has an over-inflated self-opinion, like a math teacher who claims to be the greatest math teacher in the history of numbers. The ego is one of the three parts of the personality defined by Sigmund Freud, and it’s the one that is your sense of self. Being selfish isn't always a bad thing of course, but the ego (and egomania) have a navel-gazing, self-obsessed reputation. The Oxford English Dictionary records a newspaper example from 1895 that shows how many people regard these self-centered folks: "The Ego-maniac — the degenerate who is too feeble of will to control his thoughts by a regard to the welfare of society."

narcissistic
Since the early 1900s, people have been described as narcissistic — which takes egotism and raises it to the power of obsession. The origin of the term lies with the Greek myth about Narcissus, who was so enamored of his own reflection that a piranha jumped out of the water and skeletonized him. Nah, actually he was tricked into falling in love with himself, and because he couldn't marry himself, committed suicide. That's much sadder than my piranha version. Based on this morality tale, Narcissus' inspired the word narcissism, which is actually a medical condition called narcissistic personality disorder. Not only do narcissists love themselves way too much, they don't give a crouton about other people. If you've ever dealt with a narcissist, you have my sympathy.

visage
Narcissists love to look at their own visage, which could be the name of some weird organ near the spleen, but is actually something much more accessible: the face. This word — which has the ring of poetry, but don't hold that against it — has appeared in English since the 1300s.

So whether you're a selfie star or just look at other people's selfies all day, there's no reason you can't talk about the darn things more clearly. Selfies aren't going anywhere, and despite grumpy old coots, neither is English or civilization.