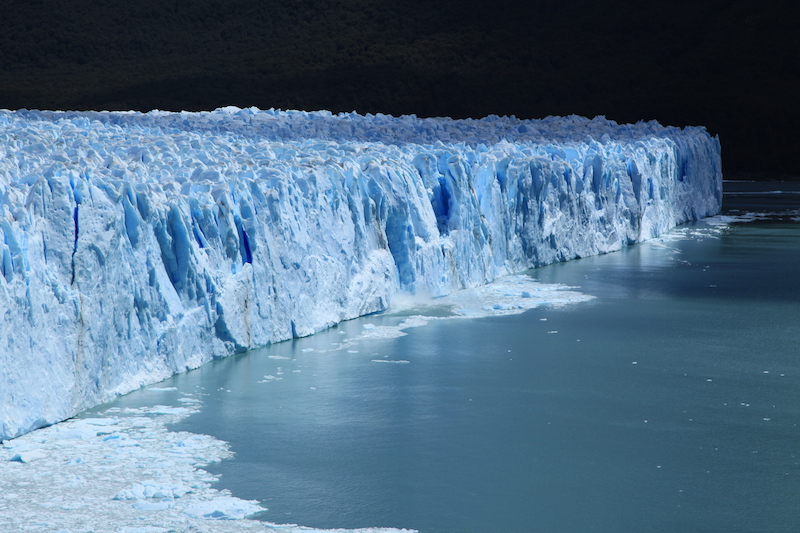 A few months ago, I wrote about phrases that had piqued (or is that peaked?) my interest, in a column on malapropisms that show us fossilized words found in phrases frozen in time. Call what I was doing linguistic paleontology.

Now, as I contemplate a new collection of frozen phrases, caught earlier in the process of change, I see that their analysis might better be described as linguistic glaciology. Language moves much in the way of a glacier: slowly, constantly, and with a force impossible for any human intervention to halt. One man's malapropism is another's innovation. (And a third man's source of humor — read this review of Robert Alden Rudin's new collection of language errors, Going to Hell in a Hen Basket for more.)

But for all intents and purposes, and no matter that you might think language change represents the collective dumbing down of our culture (I don't), we can't stop it. What we can do, as linguistic glaciologists, is strap on our crampons, drill for an ice core, and get down to marveling at what is changing and why.

And what better place to begin than with a phrase I just had the pleasure of using, "for all intents and purposes," which, according to Google searches and grammar columns, seems poised to morph into "intensive purposes" any decade now.

The phrase is old; it's a shortened form of an English legal formulation that dates all the way back to the mid-16th century's "to all intents, constructions and purposes." The "constructions" has long been dropped, and now you might be just as likely to hear "for all intensive purposes" instead of "intents and."

Whether "intensive purposes" is merely a matter of the running together of sounds or the fact that the word intent is rarely used in the plural form in everyday speech, the collocation is supported by the easy logic of the adapted phrase's meaning. One who is "focused, full of purpose" is likely to be intense as well.

Like intents, whet in "whet your appetite" is often taken as another, more familiar word, wet. Again, semantically, it is easy to put together a rationale for why some people think the phrase uses the homonym wet. Imagine being hungry, smells wafting in from a kitchen, and suddenly you're salivating at the thought of digging in. Wet's referring to saliva production is plausible. Add to that the fact that whet is all but obsolete, and it's enough to convince many of the accuracy of the "wet your appetite" interpretation.

But it is not accurate. Whet is an Old English word which means "to sharpen" and, figuratively, "to encourage or incite," and this is the sense of whet in "whet your appetite." Linguists would call the whet/wet confusion an eggcorn.

To make whet even more confusing is that the other place one may have encountered whet is also connected to water. The whetstone, used for sharpening metal things such as knives, is a tool that will quickly light things on fire if they are not constantly made wet.

The old children's song "There's a Hole in the Bucket" can actually help differentiate between the two members of the homophonic pair: Henry, the man who notices the titular hole in the bucket, has to wet the stone before he can whet the knife with the stone. (Of course, he can do neither of these because of that tragically malfunctioning bucket!)

Alas, whet seems not long for this world, but one case where those who stand for historical accuracy in linguistic expression (H.A.L.E. is not a bad acronym for a group, actually) that might have more of a fighting chance is the case of the "sleight of hand" — often misheard as the homophone slight. "Sleight of hand" dates to the early 15th century and denotes "a cunning trick requiring nimbleness" whereas slight originated about three hundred years later, and is more about intentional neglect than outright trickery.

When the waiter won't refill your water glass because you made him recite the specials three times just for laughs, you are being slighted. When the amateur card shark on the corner takes all your money in a game of three-card monte, you've been sleighted. Both of these words are perfectly useful, and they exist in realms that are different enough that both might survive.

And speaking of card sharks, debate rages about whether that someone who cheated you with a deck of 52 is a card sharp or card shark. Unlike slight and sleight, shark and sharp's meanings seem to have merged, with card sharp being preferred in England, and card shark also meaning simply someone good at cards, with no implication of cheating.

Perhaps the only card you carry is the one attesting to your membership in the H.A.L.E. society. Or perhaps you maintain a glaciologist-paleontologist-insert-name-of-metaphorically-appropriate-scientist's position of professional neutrality. Either way, like a core sample taken from a glacier, much information about the workings of language are contained in the stories of these phrases, which provide a fascinating window into the process of language change overall.