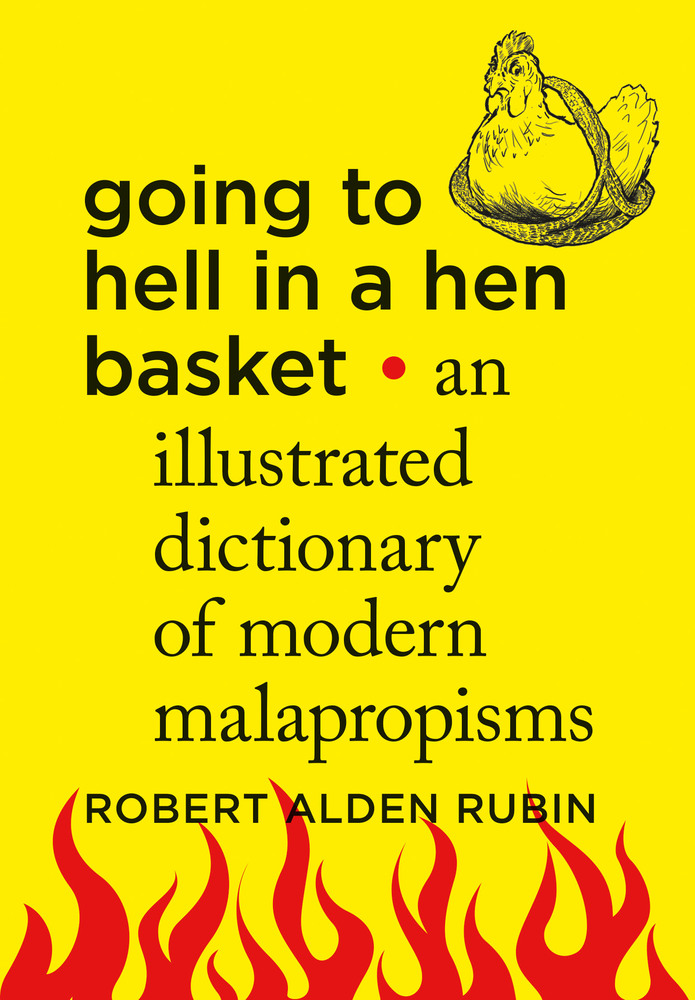 Do you like sowing your wild oaks? Do you sometimes feel like a social leopard? Could you use a new leaf on life? Or do you just enjoy the infinite creativity of the English language, even when people make mistakes? If you answered yes to any of the above, you need to check out Robert Alden Rubin's terrific new book Going to Hell in a Hen Basket: An Illustrated Dictionary of Modern Malapropisms.

Focusing on eggcorns, Rubin compiles an impressive collection of language errors, accompanied by amusing cartoons. This is one of the most enjoyable language books I've seen in years, and it should appeal to everyone from professional linguists to laypeople who don't know buttkiss (to use one of the many humorous errors collected).

It's about time someone put out an updated book of malapropisms, since we're well into the age of the eggcorn, a term first coined in 2003 on Language Log. Though not all of Rubin's malapropisms are eggcorns, they are the focus of the book, both in terms of selection and illustration selection (more on chickens and eggs later). Unlike some otherwise reliable sources — cough, OED, cough — Rubin has a strong grasp on what an eggcorn is and how it differs from other errors. I've written a lot about eggcorns myself, and what always kept me going back to the subject was their underlying message: people are smart, even when making mistakes. The eggcorn collector has always felt like a better person to me than the kind of snobby sourpuss who collects others' errors sneeringly.

But even the most curmudgeonly members of the Statler and Waldorf fan club couldn't deny the charm and logic behind many of these errors, which Rubin not only collects but puts in context with definitions and examples. Doesn't it make more sense to bloodgen than to bludgeon? The fetal position is nothing if not feeble, so why not call it the feeble position? The word knell isn't particularly relevant these days, so death nail is a more powerful, understandable image than death knell. If you didn't know better, getting read your last rights makes as much sense as receiving your last rites.

I reckon self phone is a brilliant interpretation of cell phone, the ultimate expression of our narcissism. Interestingly, this mistake also happens in reverse, as Rubin spots cellfie as a misspelling of selfie. As an enthusiast of words for nonsense, I'm particularly enamored of garbledygook. To dismiss these errors as woeful (or should I say whoaful, as in "Whoa is me!") or depressing or sign-of-the-apocalypse-y would be like pooh-poohing life on Mars just because it wasn't little, green, or male. Just about every term Rubin collects is funny or interesting or both.

The logic behind eggcorns is highlighted by a few that unwittingly return a word to its original etymology. For example, the correct idiom "cutting off your nose to spite your face" is often eggcorned as "cutting off your nose despite your face," which makes an equal amount of sense — and, it turns out, is etymologically correct. As Rubin notes, despite came before spite, so switching despite for spite returns the phrase to its roots, giving it "an ancient pedigree." When "curb your enthusiasm" is misspelled as "curve your enthusiasm," the "mistake" is similarly (though unknowingly) informed by history, since originally "A curb was a curved restraining strap attached to a horse's bit." You have to love mistakes that not only make sense, but point the way to correct etymology.

Rubin's writing style is just right for the material, clearly explaining each term's meanings, variations, and history while not being too showy. The mistakes themselves are so humorous that all Rubin needs to do is present them, and he does so expertly. But that doesn't make this a no-frills book: plenty of entertainment value is added by cartoons that are unusually cohesive and appropriate to the content of the book. The title (Going to Hell in Hen Basket), the focus (eggcorns), and even some examples (the chickens have come home to roost) are all poultry-related — and every cartoon includes a chicken.

Illustrations are common in cool word books, but Rubin's chickens add an underlying story that's damn enjoyable. You don't know what amusing botch of English you'll find on the next page, and you also don't know what shenanigans you'll see that chicken getting into. Impressively, Rubin did the cartoons himself, which may explain why the whole thing holds together so well. This is my favorite bit of chicken art since Poyo: Warrior Chicken.

Rubin has written and illustrated a terrific book that should please veteran language mavens as well as anyone who just wants a fun read. The only people I would warn against this book are grumpy language Stalinists who can't find joy in anything. Your type wouldn't like this book: you'd just want all those eggcorns and chickens off your lawn.