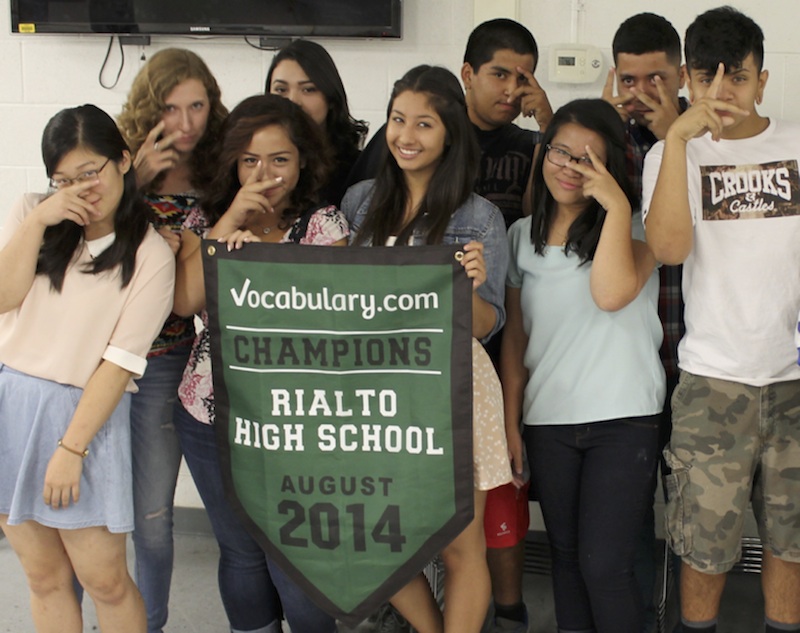 Last school year, we noted an interesting trend among the most successful schools playing in our annual Vocabulary Bowl: they were operating in an environment of district-wide play.

And the principals of these schools told us again and again that intra-district competition was a large factor in their school's success. As with interscholastic athletics or academic competitions, intra-district Vocabulary Bowl rivalry magnified students' commitment to word learning, helping them build confidence, camaraderie, and self esteem as they worked together toward the common purpose of defeating a respected rival.

This was true from the very start of last school year’s Vocabulary Bowl, when Los Angeles-area high schools Rialto High, John H. Francis Polytechnic, and La Costa Canyon High School became aware of one another's presence on the national and state leaderboards, and consequently intensified their levels of play.

Virginia Gets in the Game

Meanwhile, the same intra-district rivalry was brewing in Chesterfield County, VA, where Midlothian Middle School — which went on to a second-place victory in the Vocabulary Bowl for the year — was routinely joined at the top of the Virginia leaderboard by local rival Elizabeth Davis Middle.

Texas Wins it All

Finally, eventual Bowl champion Chavez High School of Houston, TX was highly motivated by the fact that they were challenging their football rival Bellaire High School for a monthly win. (Bellaire went on to earn third place in the Bowl.) When Pulitzer Prize-winning columnist Lisa Falkenberg wrote about the competition in the Houston Chronicle, she described how “the students and teachers at Chavez got really fired up once they took on the prestigious Bellaire High School during a monthly matchup.” (Read all about it here.)

Even if your school doesn’t make it to the very top of the national leaderboard, you can still use the Vocabulary Bowl to stoke intra-district competitive fires. Teachers and administrators have written to tell us about a day-long top-the-leaderboard challenge, or the thrill of catching the school in your district who holds the position just above yours.

So if you want your students to see the true power of the Vocabulary.com game, encourage those rivalries in your school district. With the 2015-16 Vocabulary Bowl just around the corner, take the time at the beginning of the school year to establish competitions with other schools. Principals can issue challenges to the students to see which school can outdo the other on the Vocabulary Bowl leaderboards. The challenges can start as daily or monthly matchups, and then the rivalry can carry over throughout the school year. Once the competitive juices start flowing, the sky’s the limit.

The 2015-16 Vocabulary Bowl will run from October 1, 2015 to April 30, 2016. The month of September will be “preseason” for the Bowl, allowing schools and districts to get the word out about the competition so that everyone is ready to go at the beginning of October. You can use that time to get students on board by introducing them to the Vocabulary.com game and showing them how their progress toward word mastery counts toward your school’s overall success in the Bowl. Click here to find out more!