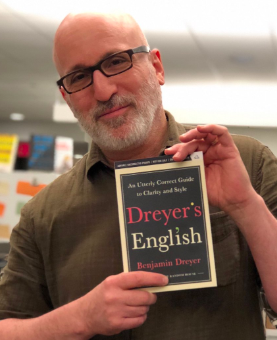 Is Dreyer's English "utterly correct"? Of course not, as the author would be the first to acknowledge. But it's compulsively readable, thoroughly helpful, and delightfully funny. For anyone who cares about writing well, it's an utterly essential addition to your shelf of most-reached-for reference books. Continue reading...
Topics: Books Grammar How to write Language Usage Writing

In the American West, wildfires have become both more frequent and more destructive. With this ominous shift has come a new vocabulary for describing fire and its outcome – and new attention to some of the oldest words in our language. Continue reading...
Topics: Language Naming Word Origins Words

Over the last 35 or so years, journey has become one of our culture's dominant metaphors, a handy stand-in for experience, ordeal, process, test, investigation, story, and series of events. Continue reading...

Coined names, dictionary-word names, an acronym, a surname: the year now ending was full of variety for anyone interested in branding trends. Here, in alphabetical order, are my top ten brand names for 2015. Continue reading...
Topics: Branding Naming

In 1948, the American journalist and language chronicler H.L. Mencken wrote an essay for The New Yorker, "Video Verbiage," in which he analyzed the lingo of the fledgling medium of television. Several of the words he gathered are now obsolete: vaudeo ("televised vaudeville"), televiewers (now just "viewers"), blizzard head (an actress so blonde that the lighting has to be toned down). Others are with us still, including telegenic and telecast. Nearly 70 years after Mencken published his essay, television itself is undergoing a massive redefinition, and so is our TV lexicon. Continue reading...
Topics: Language Media Words

Maybe it's the newly chilly air, or the dwindling daylight, or the thrilling prospect of costumes and candy. Whatever the reason, each autumn brings a harvest of seasonal neologisms, word blends, and commercial coinages as colorful as the falling leaves. Continue reading...
Topics: Branding Copywriting Fun
1 2 3 4 5 Displaying 1-7 of 38 Articles
Blog Departments
Announcements Tips & Tricks