Here's a riddle for you: How is clothing similar to a bomb that doesn't detonate or a seed that doesn't sprout? No, the answer is not "They're all useless." (Sorry, nudists.) Rather, they all share a single label: duds.

And strange as it seems, that linguistic overlap is neither a coincidence nor an accident. Since dud first appeared in the early 14th century, it has traveled a long and bifurcating path from peasant's cottage to gutter to battlefield ... and from there to the brand names in 21st-century stores.

Dud, the Oxford English Dictionary tells us, was originally dudde, a word "of uncertain origin." When it entered the language in 1300 it meant "a rough cloak" or "mantle." By the middle of the 16th century, it was appearing as a plural, duds, with the sense of "ragged clothing" — not without some shady overtones: One of the OED's sample sentences, dated 1567, is "We will fylche some duds."

Three centuries later, dud — once again singular — started being applied contemptuously to people: "a saft [soft] dud," "a wretched dud," "a person in ragged clothing." Some of this wretched-person sense may have come from a dialect word, dudman, that meant "scarecrow" as early as the 17th century. (There's no apparent kinship between dud and dude: the latter word first surfaced in 1880s America, where it meant "fastidious man.")

Gradually, the "wretched" sense of dud was extended back to inanimate objects. By 1897 it was being used to mean "a counterfeit thing," and by 1908 it could mean "a useless, inefficient person or thing." "This led naturally," says the Online Etymology Dictionary, "in World War I to 'shell which fails to explode,' and thence to 'expensive failure'." Visual Thesaurus synonyms for dud includes "washout," "flop," "turkey," and "misfire."

Somehow, this association with failure has never wiped out duds's parallel sartorial meaning. That word is still very much in circulation, its reputation considerably burnished since its "ragged" days, although it's usually reserved for informal, slangy, or lighthearted contexts. "Some women complain that the style is unflattering and disdainfully dub the duds 'mom' jeans," wrote a Wall Street Journal fashion correspondent in 2010 in a story about high-waisted denim. It's also a conveniently short substitute for "clothing" in headlines. ("Kristin Stewart sheds dark duds for sparse floral garb in Balenciaga perfume ad," reads a 2014 headline at The Celebrity Café.)

Short words are handy for brand naming, too, so it's no surprise that "duds" is a popular combining term for casual-clothing labels. Cuddl Duds, a manufacturer of thermal underwear and pajamas, has been in business since 1978; regardless of how you feel about the truncation of "cuddle," you'll have to grant that the "ud" repetition makes the name fun to say. 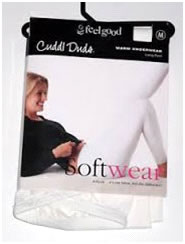 One trademark stands out from the Duds crowd because it has nothing to do with clothing. Milk Duds — the chocolate-and-caramel candy — was named back in 1926 by F. Hoffman & Company of Chicago. According to the Old Time Candy website, "the Milk Duds name came about because the original idea was to have a perfectly round piece. Since this was found to be impossible, the word 'duds' was used." ("Milk" in the name reflected the large amount of milk in the product.)

Cecil Adams of The Straight Dope, the answer site that's been debunking myths far longer than Snopes — "Fighting Ignorance Since 1973" is Straight Dope's tagline — is just as bemused by the name as you probably are:

On the one hand you have to wonder what kind of marketing department sits around and thinks, "Hm. How can we call attention to the defects of our product?" On the other hand, there's a sort of heroism in this approach. Here's the product development team, contemplating a bunch of nonspherical chocolate covered caramels lying forlornly on the lab bench. Their leader speaks: "You know, boys, if this were New York or Los Angeles, we'd go nuts trying to put a positive spin on this, like here's the alternative candy for those who aren't afraid to be a little off-center and blah blah blah. But this is Chicago. I say we just call a spade a spade."

Over the next 70 years, Milk Duds passed from F. Hoffman to a variety of other owners, finally landing, in 1996, in the portfolio of Hershey Foods of Pennsylvania. Amazingly, neither Hershey nor any of the previous stewards of the Milk Duds brand ever changed the product name; it's one of those rare cases of a negative word acquiring positive associations through persistent marketing. (Virgin Airlines is another example.) The recipe, however, is a different story: In 2008 Hershey's switched to cheaper ingredients in Milk Duds and other candies, replacing cocoa butter with vegetable oil and prompting an outcry among fans of the brand.

That recipe change isn't the only dud associated with Milk Duds. If you visit the Hershey's Chocolate World theme park in Pennsylvania, you may encounter an employee dressed in character. 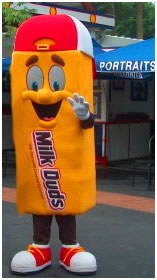 Photo: Travels with a Muse.

Yes, it's a Milk Duds costume. Or, if you prefer, Milk Duds duds.