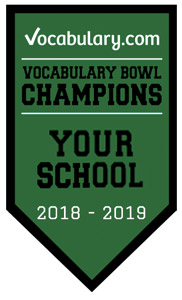 Take it from these Vocabulary Bowl banner-winning schools from all across the map.

No matter where your school is located, no matter how many students it serves — every school has a solid shot at an award-winning finish in the Vocabulary Bowl.

There's nothing we love more than celebrating students' academic achievement, so last year we expanded the Vocabulary Bowl awards to recognize more than one hundred of the top word-learning schools across North America. At the end of the season, banners were awarded to the top ten middle and high schools and the top five schools in Divisions I, II and III, which are based on enrollment size. We also presented a banner to the school that mastered the most words in each U.S. State and territory and each Canadian Province.

That's a lot of banners, and they're all up for grabs once again when the 2018-19 Vocabulary Bowl season starts on October 1.

In the Vocabulary Bowl, schools have a shot at winning a banner — but what's in it for the students? The more they play, the more they learn, so it's a win-win for everyone.

What makes the Bowl unique among academic competitions is that every student who plays and learns on Vocabulary.com is "on the team" for their school. If they're enrolled, they're in. Each word they master counts as a point for their school, so learners at every level are part of a collective effort to propel their school up the leaderboards.

When it comes to achieving success in the Bowl, here's a mantra from past winners: Dream big, start small. The Vocabulary Bowl leaderboards are structured so that competing is fun and success is attainable, even if you're just getting started. Every banner-winning school started small at one point, often with just a handful of students in one or two classes trying to top their state leaderboard for a day. Once students see that their concerted effort can yield significant gains, it's time to raise the bar and challenge them to extend their streak to a week, then take it from there.

The upcoming Vocabulary Bowl season begins on October 1, 2018 and runs through April 30, 2019. In addition to the banners mentioned above, we also award a Champions Banner to the winning school each month. Here's how to get your school involved in the Vocabulary Bowl.