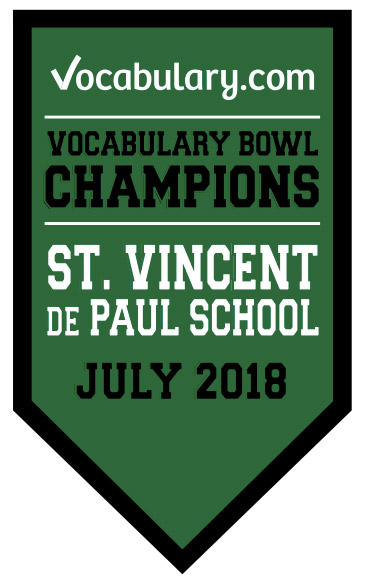 About 500 students attend St. Vincent de Paul, which serves students through the 8th grade. Each year, like thousands of other middle schoolers across the country, the children are tasked with a summer reading assignment before they return to school in August.

But rather than just sending kids home with a book and hoping for the best, veteran English teacher Kathy Zimbaldi also assigns work on Vocabulary.com. She gives her students Practice assignments that are paired with the books selections, including beloved titles like Hatchet and Esperanza Rising. As they complete the Practice, students learn the words from the books in the context of the text original, and are better prepared to tackle their independent reading.

We checked in with Mrs. Z. recently, and learned that this innovative approach was initially met with some trepidation on the part of kids and parents. However, now that the St. Vincent’s community has grown accustomed to the higher expectations — not to mention the Vocabulary Bowl success — summer Practice on Vocabulary.com has become something of an institution at the school.

The July '18 win brings St. Vincent de Paul's Vocabulary Bowl banner haul to six, putting them in the big leagues with National Champions Etiwanda High School and Chavez High School. These are the only three schools to have won the monthly Champions title more than two times. Chavez has racked up thirteen banners, and Etiwanda has ten.

As more schools across North America catch Bowl fever, the competition to master the most words intensifies each and every month. Who knows if St. Vincent de Paul School will extend their streak to five July wins next summer. We’ll be watching the leaderboards and cheering on every school out there that's tapping into the power of friendly competition to motivate their students to improve their literacy skills.

The Bowl leaderboards are structured so that schools of every size can compete year 'round on the county, state and national level on a daily, weekly and monthly basis. We also award banners to Division and State winners for the academic season. This year's Bowl starts on October 1st, so this is the perfect time to learn more about getting your students signed up to play, compete and learn.