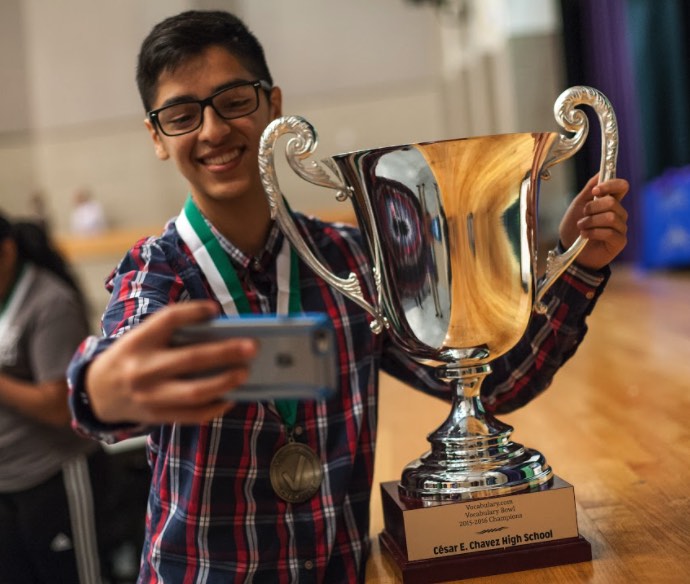 The 2020–2021 Vocabulary Bowl has ended, and the preliminary results are in!

Congratulations to the thousands of learners from across North America who participated on behalf of their schools, and thank you to all of the educators, administrators, and parents for their support.

The Vocabulary.com team is certifying the official Vocabulary Bowl results, and in the meantime we are releasing the projected winners and runners-up in the major awards categories.

The provisional Vocabulary Bowl high school winner is defending champion Etiwanda High School of California. This is the fifth straight title for the Eagles, who hold the record for the most championship wins in the competition. Walnut Hills High School of Ohio is the projected runner-up in the high school category, continuing their own impressive streak for five straight years.

The provisional Vocabulary Bowl Middle/Elementary School Champion is McKenzie Middle School of Tennessee. This will be the first championship title for the relentless Rebels, who were neck-and-neck with second place Harris Road Middle School of North Carolina all season until a Herculean effort on the final day gave McKenzie the decisive edge.

In Division I, schools with 1000+ students, top ranks in the high school category are projected to be held by Etiwanda and Walnut Hills.

The projected winner among Division I middle and elementary schools is Harris Road Middle School, with Hialeah Gardens Middle School of Florida in the runner-up spot. This will be the first year for both Harris Road and Hialeah to hoist a hard-won Vocab Bowl trophy.

In Division II, for schools with 500–999 students, the provisional winner in the high school category is The Ursuline School of New York. Maryland's Saint Mary's Ryken High School is the projected runner-up. For both Ursuline and Saint Mary's, this will be their highest Vocab Bowl achievement to date and their first season as trophy-winners.

The provisional Division II Champion in the middle/elementary school category is Great Neck North Middle School of New York with an impressive three-peat. The projected runner-up is Pines Middle School, making this their highest accomplishment in the competition thus far.

In Division III, for schools with up to 499 students, the provisional winner in the high school category is vaunted vocab veteran Buckingham Charter High School of California with their third title. Trinity Christian School is the projected runner-up, making their first season as trophy-winners.

Stay tuned for the official results, to be announced on May 7.