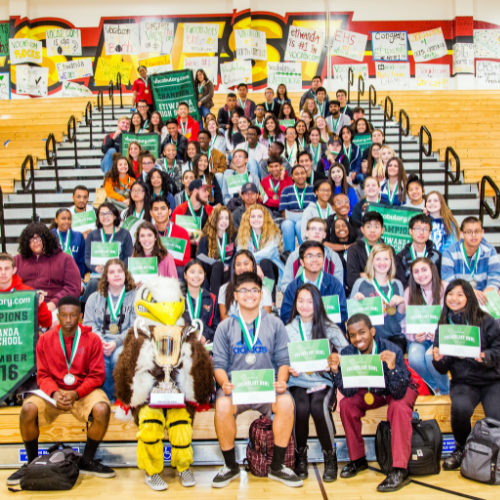 This season, nearly one million students from 33,321 schools across North America competed and collectively mastered 32,231,909 words! Congratulations to all of the scholars who participated on behalf of their schools, and thank you to all of the educators, administrators, and parents for their support.

Now that the results have been tallied, it's awards season! Here's a rundown of the top schools in North America for the 202–2022 season.

No surprise here! The five-time defending champion Etiwanda High School of Etiwanda, California is this season's overall Vocabulary Bowl Champion. The Eagles' mastered 359,508 words to take home their sixth consecutive title, adding yet another historic win to their resume. Etiwanda's Eagles, fueled by their dedication to word mastery, also finished first in both the High School Division, Division I and the state of California. Walnut Hills High School of Cincinnati, Ohio — landing right behind Etiwanda with 228,684 words mastered — is the Runner-Up in two categories: High School Division and Division I. Walnut Hills' Eagles also took home their fifth Ohio State Championship, continuing their record as the second most-decorated school in Bowl history.

In recent years the middle school division has become one of the most anticipated and heated races of the season. Right out of the starting gate, Harris Road Middle School of Concord, North Carolina was determined to not let the middle school championship title slip through their fingers. Last season, the Patriots narrowly missed the championship title to McKenzie Middle School, in a Cinderella-like upset. This season, Harris Road mastered 238,143 words to propel them to first place in the Middle School Division, Division I Middle Schools, and in the state of North Carolina. They also knocked out four-time defending Runner-Ups Walnut Hills for the overall runner-up title. But McKenzie Middle School of McKenzie, Tennessee proved they're no one hit wonder. The small-but-mighty Division III school mastered 144,040 words to take home the title of Middle School Runner-Up. The Rebels also placed first in Division III Middle Schools and in their home state of Tennessee.

In Division I, made up of schools with 1000+ students, McAuliffe Middle School of Los Alamitos, California mastered 120,889 words to take home the Division I Middle School Runner-Up banner. The Eagles are no strangers to the middle school leaderboards, they even held the coveted Middle School Champion title in 2019–2020. After a short hiatus last season, McAuliffe is back on top of the divisional leaderboards, positioning themselves for another championship next season.

For the past three seasons, Division II, made up of schools with 500–999 students, has been dominated by middle schools. However, this year one high school in Leonardtown, Maryland decided to change that. This season, St. Mary's Ryken High School earned the title of Division II Champion. They mastered 162,021 words, an impressive feat after finishing with 89,936 words mastered last season. Coming in second in the high school category are the two-time Division II High School Champions from The Ursuline School from New Rochelle, New York. The Koalas continue to top the Division II High School leaderboards and this year's Runner-Up title marks their 4th season in the top two.

Over in the Division II Middle School race, new faces continue to emerge as they beat out vaunted Bowl veterans for top spots. Fairly new to the Vocab Bowl, DuBois Area Middle School of Pennsylvania came out of the woodwork to place second overall in Division II and first in the Division II Middle School category. The Beavers obliterated their 602 total words mastered from last season by mastering an astonishing 141,155 words this year. DuBois Middle School also placed first in the state of Pennsylvania, taking away the title from the defending champs and their rivals at DuBois Area High School. Middle School Runners-Up, Ladera Vista Jr. High School of Fullerton, California has consistently placed in the Division III top fifteen since 2018. This season, they doubled down on word learning and words mastered to take home their first divisional runner-up title.

In Division III, made up of schools with fewer than 500 students, Larry Lexicon and the Knights are back on top! Former Division III champs Buckingham Collegiate Charter Academy of Vacaville, California mastered 168,672 words to take home their fourth Division III Champion title. But that's not all, Buckingham also placed fifth overall, their highest ranking to date, butting elbows with Bowl behemoths like Etiwanda and Walnut. High School Runners-Up, Mayville High School of Mayville, Michigan is no stranger to the Division III leaderboards. This season the Wildcats finished strong with 74,237 words mastered to take home their second Division II Runner-Up title, their first since the 2016–2017 season. Mayville also came in first place in the state of Michigan, their second time holding the honor.

In the middle school field of Division III, Currituck County Middle School from Baroco, North Carolina has proved to the competition that second place will not come easy. With 82,0111 words mastered, the Raiders valiantly defended their spot at the top of leaderboards to take home their third Division III Middle School Runner-Up title in a row.

The Bowl Goes On!

Although the official Vocabulary Bowl season has come to an end, students can continue mastering words to boost their comprehension, extend literacy beyond the classroom, and grow into more engaged readers. Play the Challenge to start mastering more words or browse our teaching resources to see how Vocabulary.com aligns with any curriculum.