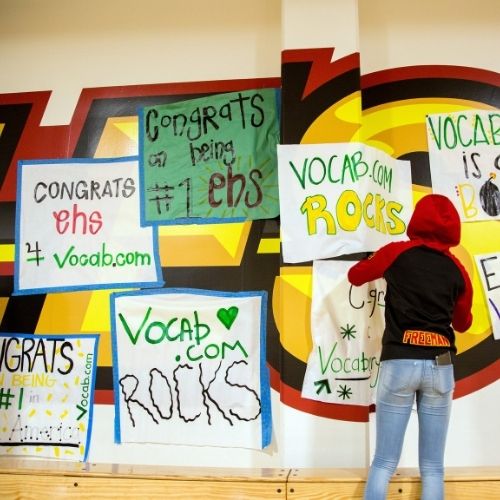 The 2021–22 Vocabulary Bowl's season got underway last month, and schools from all across the map blasted out of the gates to put up staggering stats in October.

Just like clockwork, the reigning five-time champions from Etiwanda High School out of Etiwanda, California, soared to the top of the leaderboards. In October, the Eagles mastered 70,269 words to take home yet another monthly championship banner. Etiwanda may be an early favorite (and the most decorated school in Vocab Bowl history) but it’s way too early to count out other contenders.

And one of those contenders is stacking up to be American High School from Fremont, California. Still relatively new to the Vocabulary Bowl scene, the Eagles placed 3rd last season. This season, it looks like they refuse to back down — flying dangerously close to Etiwanda’s orbit. Another school punching way above its weight this season is defending Division III Champion, Buckingham Charter from Vacaville, California. A well known player on the Division III scene, will the Knights go all the way this season?

Over in the Middle School Division, Harris Road Middle School from Concord, North Carolina came out on top in October. Students mastered 38,730 words to take home their second monthly championship win in a row. For the past few seasons, the Patriots have been steadily climbing the middle school leaderboards — finishing second overall last season.

Thanksgiving Away with Words Challenge

Schools across the map are invited to compete in a special Away with Words Challenge! Over the holiday, the Vocabulary.com team is throwing down the gauntlet to see which school in each division can master the most words over Thanksgiving Break.

Each school that finishes the week at the top of their division leaderboard will be crowned the Thanksgiving Break Champions. That's a claim to fame which will earn them an official Vocabulary Bowl achievement certificate and hefty bragging rights.

What: Thanksgiving Away with Words Challenge

When: November 22 – November 28, 2021
Where: Anywhere you are! Students log on to Vocabulary.com from any device to master words and earn points for their school. Here's how.
Who: Open to all accredited K-12 schools in the U.S.*

While the 2021–22 season is already underway, it's never too late to get your school involved in the Vocabulary Bowl. We award Champions Banners each month all year long, and the sooner you join the sooner your students can start building their vocabulary knowledge — and their Vocab Bowl momentum. With county, state, and division leaderboards where you can vie for the top each day, week, and month, there's a level of competition that's right for every school. Here's how to get involved and put your school on the map.