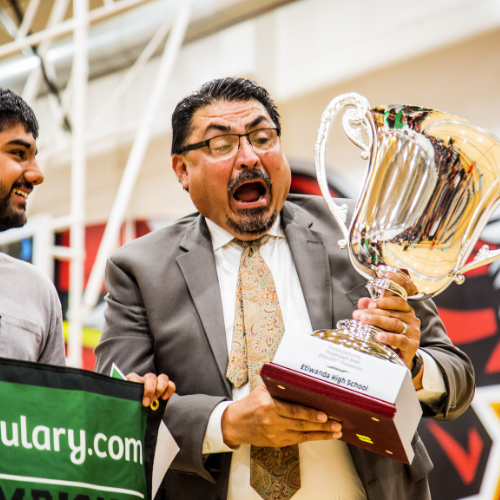 With only ONE MONTH to go in the Vocab Bowl, schools across the map are sprinting toward the top of the leaderboards.

Congratulations to Etiwanda High School from Etiwanda, California for coming out with another decisive monthly victory. The Eagles mastered 44,825 words in March, taking home another monthly championship banner. Building on their monthly momentum, the students at Etiwanda refuse to slow down even though they have their sixth Vocabulary Bowl Championship all but wrapped up in a pretty little bow. There’s no doubt why they’re the most decorated school in Vocab Bowl history.

Over in the Middle School Division, a change is afoot. For the first time all season long, Harris Road Middle School out of Concord, North Carolina has been dethroned. The defending Middle School Champions from McKenzie Middle School in McKenzie, Tennessee are back on top of the leaderboards. With a powerful surge of word learning in the month of March, the Rebels mastered 57,419 words.

Down to the Wire

In an unprecedented maneuver, Harris Road Middle School knocked the defending five-time Vocabulary Bowl Runner-Ups, Walnut Hills High School in Cincinnati, Ohio, out of second place. Not only are the Patriots primed for their first-ever Middle Champions title, they’ve also climbed their way to second place overall, soaring past Bowl behemoths on the way. With over 25,000 words mastered between them going into the last month of the season, the Eagles have a lot of work to do to defend their title. Will this be the year that Walnut gets booted out of the top two?

Over in Division III, it looked like Champion had already been decided, Buckingham Charter High School from Vacaville, California held a steady lead over the defending Champions at McKenzie Middle School. Larry Lexicon and the Knights have spent all season reminding the Rebels that they won’t go down without a fight. Up until last season, Buckingham Charter dominated division, winning titles in ‘17-18, ‘18-19, and ‘19-20.

Then last season, McKenzie, who was relatively new to the Vocab Bowl scene, stormed the leaderboards in a Cinderella Story-like upset. The Rebels had a slow start to this season and are out of reach to take home another Middle School Championship. But don’t count them out just yet, their impressive burst of word learning in March has put them in seriously close striking distance of first place in Division III. This is sure to be a race that will come down to 11:59:59 PM on April 30th.

Schools across the map are invited to compete in our second annual Final Buzzer One-Day Challenge! To celebrate the last week of the ‘21–22 season, the Vocabulary.com team is throwing down the gauntlet to see which school in each division can master the most words in 24 hours.

Each school that finishes the day in the top 5 of their division leaderboard on April 28th will be crowned the Final Buzzer Champions. That's a claim to fame which will earn them an official Vocabulary Bowl achievement certificate and hefty bragging rights.