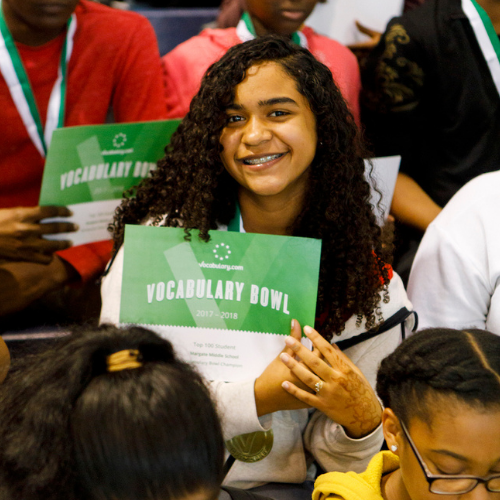 Schools across North America started 2021 with a burst of word-learning, lighting up the Vocab Bowl leaderboards.

Congratulations to Cincinnati's Walnut Hills High School, who continued their red-hot winning streak in January by mastering 43,785 words. This is the Eagles' fourth monthly championship title and their 37th appearance in the Top Ten. They've cut Etiwanda High School's lead to 25,000 words, and if they can keep up this intensity the three-time runners-up may finally topple the four-time champions when the final bell rings on April 30.

In other High School action, Charles W. Flanagan High of Pembroke Pines, Florida came in third behind Etiwanda, with fellow Floridians Saint Thomas Aquinas taking fourth. Trinity Christian School of Fairfax, Virginia came in fifth — their second-ever showing in the Top Ten. All of these schools are posting their highest word-learning stats to date.

The Patriots at Harris Road Middle School in Concord, North Carolina are celebrating their second consecutive monthly win in the Middle and Elementary School Division after pulling down 21,939 words! This is their third monthly championship and their tenth appearance in the Top Ten. Second place McKenzie Middle School is only around a thousand words behind Harris Road, so this race could be neck-and-neck until the finish.

In Division II — schools with 500–999 students — Great Neck North is still out in front, but Pines Middle is coming up fast behind them, winning January with 21,103 words. And just behind Pines last month was the Owasso Eight Grade Center of Owasso, Oklahoma, logging their fifth time as state champions.

There's a group of five schools behind Pines that are all separated by just a few thousand words, so this is a race to watch. In Division III — schools with fewer than 500 students — McKenzie maintained their solid lead, but Trinity Christian is gaining on second place Buckingham Charter. Somerset College Preparatory Academy and the Infinity Institute round out the top five.

Halfway Day Was All Fun

On January 15th, schools across North America marked the halfway point of the Vocabulary Bowl season with a one-day word-learning challenge. Halfway Day saw schools in every state compete to see who could learn the most words in one day. The winner in each state will get an official Vocabulary Bowl certificate of achievement. Click the link to see which school won your state!