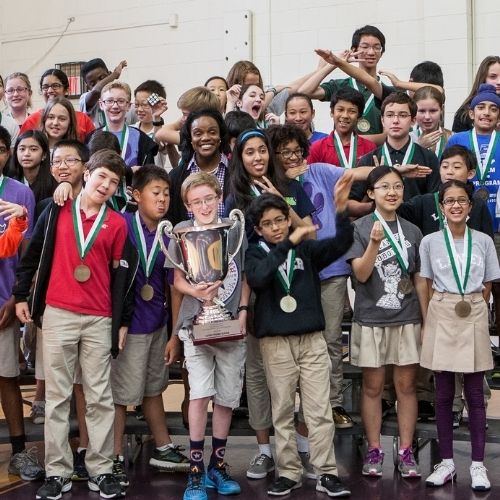 With only two months left in the 2021–22 season, students are ramping up their word learning as they make their way towards home plate.

Just when we thought it wasn't possible, two schools are on track to set a new Vocabulary Bowl record. For the first time in Vocab Bowl history, the same school has won EVERY single monthly championship banner of the season — in both the High School and Middle School Divisions. Etiwanda High School from Etiwanda, California and Harris Road Middle School from Concord, North Carolina have snagged the top spot on the monthly leaderboards for the entirety of the 2021–22 season.

In the High School Division, Etiwanda mastered 61,738 words in February, taking home their 32nd monthly championship title. No stranger to Vocab Bowl records, the Eagles continue to hunt down record after record each month. And if they keep up this pace for the remainder of the season, they’ll have multiple Vocab Bowl records to add to their belt.

Over in the Middle School Division, Harris Road topped the leaderboards last month. The Patriots mastered 35,069 words and earned their sixth hang-in-the-gym-worthy banner in a row. With this win Harris Road has now put over 90,000 words mastered between them and second place. Giving them a huge lead over Tequesta Trace Middle School out of Weston, Florida going into the last two months of the season.

Things over in the High School Division are starting to heat up as five-time runner-up Walnut Hills High School from Cincinnati, Ohio continues to hold off American High School out of Fremont, California. And while American chases down the number two spot, Charles W. Flanagan High School from Pembroke Pines, Florida are nipping at their heels — only 2,000 words mastered behind in fourth place.

In the Middle School Division, the race to second place is even more contested with some of the biggest names in the Vocab Bowl chasing down the Runner-Up title. With less than 10,000 words between second and seventh place, this is THE race to watch going into the final two months of the 2020–21 season.

Schools across the map are invited to compete in our second March Madness One-Day Challenge! On March 30, the Vocabulary.com team is throwing down the gauntlet to see which school in each division can master the most words in 24 hours.

Each school that finishes the day at the top of their division leaderboard will be crowned the March Madness Champions. That's a claim to fame which will earn them an official Vocabulary Bowl achievement certificate and hefty bragging rights. View the full details here.