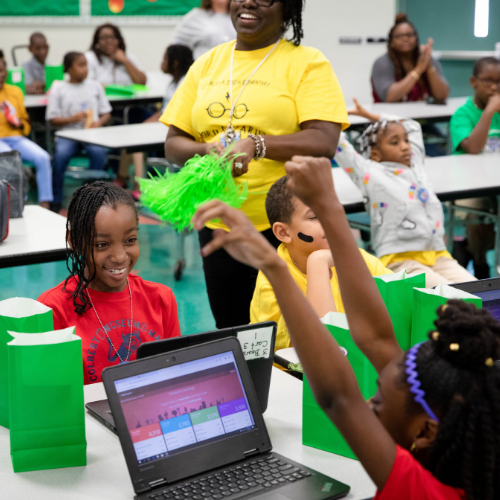 As 2021 winded down, schools across the map lit up the leaderboards in the quest for word domination.

In December, Etiwanda High School out of Etiwanda, California, soared to the top of the leaderboards. The Eagles mastered 27,350 words to take home their fifth monthly championship banner. These latest awards will go nicely with their FIVE championship banners and a whopping THIRTY monthly banners that already hang in their gym. Are the Etiwanda Eagles invincible or is this the year someone breaks their winning streak? With more than half of the Vocab Bowl season to find out, we’re keeping an eye out for some other Eagles.

The (aptly named) Eagles over at American High School in Fremont, California and Walnut Hills High School from Cincinnati, Ohio aren’t backing down. A long-time Vocab Bowl veteran, Walnut Hills has been crowned Vocab Bowl Runner-up four years running. But in the current standings, American High proves to be a formidable opponent, making sure Walnut doesn’t get too comfortable at number two by pushing them into a 3rd place position.

Over in the Middle School division, Harris Road Middle School from Concord, North Carolina held steady at the top of the leaderboards. The Patriots mastered 27,200 words in December to take home their fourth monthly championship win in a row. The Patriots had to settle for Middle School Runner-up last season. But this year they came charging out of the gates and have put over 50,000 words between them and second place. If Harris Road continues this pace, they are on track to take home their first ever overall championship banner.

However, there are some big names at the top of the Middle School leaderboards and we can’t count out these ferocious competitors. In second place from Margate, Florida is Margate Middle School. The Spartans are no strangers to the top of the leaderboards and are the most decorated middle school in Vocab Bowl history — with an impressive four overall champion titles. And right behind them in third place is another school out of Broward County, Tequesta Trace Middle School from Weston, Florida. The Cougars finished 12th in the middle school division last season but are already close to surpassing their total words mastered from last year.

In Division II — schools with 500–999 students — the race is heating up between some of the most heated rivals in the Vocab Bowl. In the High School division, St. Mary’s Ryken High School from Leonardtown, Maryland is topping the leaderboards over two-time defending champs at The Ursuline School in New Rochelle, New York. The Knights placed 7th in the 2020–21 season but are on track to give the Pandas a run for their money this season.

In the Middle School division, former Vocab Bowl champs from the 2017–2018 season are back on top. Ladera Vista Jr. High School from Fullerton, California may have fallen off the map the past couple of seasons but they are BACK and ready to rumble. Pines Middle School out of Pembroke Pines, Florida is also a steady fixture on the Division II leaderboards and the reigning Middle School Runner-up. Currently in second place behind Ladera Vista, will this be the season the Cougars go all the way?

Punching Above Their Weight

In Division III — schools with fewer than 500 students — it looks like the front-runners are already pulling away from the pack, ready to clinch another Bowl title. In the High School division, defending champions Buckingham Charter High School from Vacaville, California refuse to back down. Month after month, year after year, Larry Lexicon and the Knights continue to prove that schools of any size can compete with the big dogs in Divisions I and II.

Over in the Middle School division, McKenzie Middle School from McKenzie, Tenneesee continues to punch above its weight. This small-but-mighty Division III school won the OVERALL Middle School Champion title last season and has already put over 20,000 words between them and second place. But it’s too early to count out the students over at Currituck County Middle School in Barco, North Carolina. The Raiders placed 2nd for the last two seasons in a row and have been known to make some last minute comebacks.