Jim Burke's classic guide for the teaching of English, The English Teacher's Companion, is now in its fourth edition, but one element that has remained intact over the years is a list of 358 academic vocabulary words Burke culled from a survey of textbooks, assignments, standards, and examinations. Although the term academic vocabulary means different things to different educators, I like to think of Burke's use of the term as representing the vocabulary of directions. This notion of paying attention to the most commonly used words in directing students to think and perform in different ways is a vital one, since as Burke puts it, "You cannot expect to succeed on assignments if you do not understand the directions."

Teachers, if the thought of addressing 358 academic vocabulary terms in your limited class time is daunting, send your students to learn the words on their own time from this Vocabulary.com word list based on Burke's list and then focus your valuable class time on a subset of the words that you find to be the most critical. Burke recently came out with this "A-List" of 15 academic vocabulary words that he based on what his current teaching colleagues decided are central to all subjects and in keeping with the Common Core.

The "A-List" and Standardized Test Directions

Out of curiosity, I took Burke's "A-List" and field-tested it by examining the language used in sample test items created by the two largest assessment consortiums in the business of creating new Common Core-aligned exams to be implemented in the states which adopted the Common Core: Smarter Balanced and PARCC.  And, sure enough, many of the "A-List" words were popping up all over the place throughout the exam directions.  Here are a couple of sample test items, along with some analysis of how a better understanding of a few "A-List" academic vocabulary words can prove crucial for students trying to follow the test directions.

This 4th grade media literacy series of items asks students to watch a science video on "Exercise in Space" and to "interpret and use information delivered orally or audio visually."

Students are then asked to complete the following writing task:

This multiple choice question and writing task related to the "Exercise in Space" video contain four out of the fifteen words from Burke's "A-List." According to the scoring rubric for the writing task, a student's understanding of the word support as meaning ‘supplying evidence' is essential in scoring well on the task. According to the rubric, a student scoring a maximum score on the task (i.e., 2/2) would have written a response that accomplishes the following:

If I were to highlight only one verb on the "A-List," it would be support. Based on my brief survey of questions, it shows up the most often in writing task directions. And, based on this rubric, students need to learn that when they see the word support in a set of directions, they should interpret it as a request for evidence in the form of specific information and details from the subject of the text item (in this case, the video). 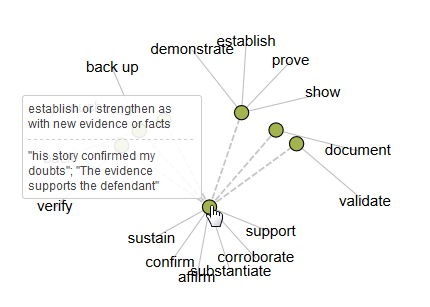 For each of the "A-List" verbs on his list, Burke provides teachers and students three related words to help them make further sense of the verb. For example, the word analyze is followed by break down, deconstruct, and examine. For students, being able to distinguish the act of analysis as different from the act of summary is key in more sophisticated literary tasks. In this PARCC writing task, students are not being asked to retell the narratives, but rather to apply a more sophisticated process of breaking down and examining how Sexton's poem transforms (another "A-List" verb) Ovid's myth. 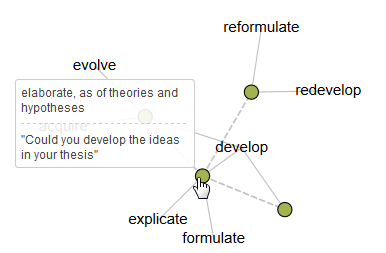 PARCC's use of the "A-List" verb develop implies that students are being asked to formulate an opinion and to elaborate on that opinion with textual evidence. On Burke's "A-List," the verb develop is followed by the related words formulate, generate, and elaborate.

Burke's "A-List" should be commended for a couple of reasons. First, he illustrates willingness to raise the issue of academic vocabulary as an across-the-disciplines discussion so that teachers from all departments can become more mindful of the language being used to direct and assess their students. Second, Burke has created a simplified, printable "student version" of the list that can be easily blown up and posted on classroom walls. Burke's efforts help dispel the notion that vocabulary is somehow owned by the English department and help promote "the vocabulary of directions" as a visible, school-wide concern.

Georgia Scurletis is Director of Curriculum for the Visual Thesaurus and Vocabulary.com. Before coming to Thinkmap, she spent 18 years as a curriculum writer and classroom teacher. Georgia has written curriculum materials for a variety of Web sites (WGBH, The New York Times Learning Network, Edsitement) and various school districts. While teaching high school English in Brooklyn, she was a recipient of the New York State English Council's Educators of Excellence Award, the Brooklyn High Schools' Recognition Award, and The New York Times' Teachers Who Make a Difference Award.

Click here to read other articles by Georgia Scurletis