Among the idioms of modern American English, few are as puzzling to unpack as the expression "the whole nine yards," meaning 'the full extent of something.' Though it is of relatively recent vintage, etymologists have yet to discover a credible historical explanation for what the "nine yards" might refer to — there are a multitude of theories, some quite fanciful, but none are supported by documentary evidence. In the past few years, however, some significant progress has been made to unearth early examples of the idiom, which may eventually help to smoke out where those "nine yards" originally came from.

Here are just a handful of the conjectures for the origin of "the whole nine yards":

Despite the plethora of explanations, the expression hasn't been around for very long. Until a few years ago, the earliest recorded examples came from the Vietnam War era, but thanks to the concerted digging of word sleuths, we can now date "the whole nine yards" (and its variants) back to the early 1960s. The current holder of the "earliest attestation" crown was found just last week by Stephen Goranson, who announced his discovery on the American Dialect Society mailing list (ADS-L). It shows up in "Man on the Thresh-Hold," a rambling short story by Robert E. Wegner in the Fall 1962 issue of Michigan's Voices, a quarterly literary magazine. Here is the long stream-of-consciousness sentence in which it appears:

Who knows why a "brush salesman" would be fond of saying "the whole damn nine yards"? This was the era of the Fuller Brush man, the legendary traveling salesman who would go door to door hawking brushes, brooms, mops, and so forth. Maybe it took nine yards of material to make a mop!

The next known example also comes from late 1962, found a couple of years ago by another ADS-L contributor, Bonnie Taylor-Blake. This passage appears in a letter to the editor in the December 1962 issue of Car Life: 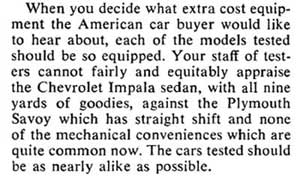 This goes a little further toward illuminating the phrase: it appears to be an exaggerated way to describe a long "laundry list" of items, not necessarily some material like ammunition or fabric that can be measured in yards. In an automotive context, the image that might be evoked is a long list of features on a window sticker at an auto dealership. So "nine yards" could simply refer to the length of an itemized list of this sort, with "nine" a more or less arbitrary figure for hyperbolic purposes.

After these two examples from 1962 comes a syndicated newspaper article from April 1964 found by Sam Clements, describing the lingo of the then-burgeoning space program. It appeared in a number of different newspapers, including the San Antonio (Tex.) Express and News (4/18/64) and the Tucson (Ariz.) Daily Citizen (4/25/64). Included in the survey of NASA-talk is this paragraph:

Again we get an image of an extended list of things, in this case "an item-by-item report," with the exaggerated length of nine yards. Since the space program was strongly intertwined with the US Air Force, this example might lend credence to the idea that the phrase was first popularized in Air Force circles before spreading to wider usage. (Perhaps even the brush salesman and the car enthusiast from 1962 had some Air Force ties.) But it's still a bit of a jump to say that the expression originated in World War II military usage, as many claim, since no contemporary wartime evidence has yet been found — let alone evidence that "nine yards" was a measurement for a bomb rack, ammo belt, or some other piece of equipment.

The hunt continues. The above examples have only become locatable quite recently because of rapidly expanding digitization projects for books and periodicals. The 1964 example was found in the Newspaperarchive database, while the 1962 examples were both discovered on Google Book Search — with additional legwork needed to confirm the "snippets" that Google coyly reveals from these sources. (Thanks to Joel Berson and Bonnie Taylor-Blake for sending along hard copies of the relevant pages for these two citations, which they obtained by doing good old-fashioned library research.) I'm confident that some day we will get to the root of the elusive "nine yards" enigma!