Every writer knows the feeling: you've just released a carefully edited piece of prose into circulation, and when you take another look you cringe at the sight of a typo that you missed. With online writing, typos can very often be fixed without anyone even noticing. Printed errors usually require red-faced corrections. But don't feel too bad: imagine if your typos were etched in granite for all to see!

Just in time for the federal observation of George Washington's birthday (aka Presidents Day), the New York Post has breathlessly reported on a typo in a quote from Washington chiseled in granite on the front of the New York State Supreme Courthouse in lower Manhattan. The inscription above the columns reads: "The true administration of justice is the firmest pillar of good government."

These words have stood for more than eight decades without anyone noticing that the quote is just a wee bit off. If you go to the George Washington Papers at the Library of Congress website, you can see a reproduction of the letter from which the quote was taken, written by Washington to Attorney General Edmund Randolph on September 28, 1789:

Impressed with a conviction that the due administration of justice is the firmest pillar of good Government, I have considered the first arrangement of the Judicial department as essential to the happiness of our Country, and to the stability of its political system; hence the selection of the fittest characters to expound the laws, and dispense justice, has been an invariable object of my anxious concern.

Other than editing down a typically prolix 18th-century sentence (which wouldn't have fit on the front of the courthouse very well!), the designers inserted a minor change: instead of "the due administration of justice," it reads "the true adminstration of justice."

The Post, never one to underplay a story, announced that this long-standing typo is nothing less than "a stunning slap at the Father of our Country." I wouldn't go that far, but perhaps it does insult Washington's memory in a small yet important way. James Rees, executive director of the Washington estate in Mount Vernon, Virginia, is quoted as saying, "Washington was a real stickler for detail. He wasn't one to let small things slide, so it would make a little bit of difference to him that they got this one right."

Blame for the error has been assigned to Boston architect Guy Lowell, who won the 1913 competition to design the courthouse and died in 1927, the year the building opened. Though Lowell's flub is unforgivable, it is at least understandable: due and true are quite close in both sound and sense, and "the true administration of justice" sounds more idiomatic to modern ears. Moreover, it's a mistake that many others have made, including Pulitzer Prize-winning historian Charles Warren in his 1922 book, The Supreme Court in United States History.

Engraved typos continue to this day, though it usually takes less than 80 years for someone to spot them. One that made headlines last year appeared on the statue of beloved Chicago Cubs player Ernie Banks unveiled outside of Wrigley Field. Banks is fondly remembered for saying, "It's a beautiful day for a ballgame. Let's play two!" (In other words, we might as well have a double-header, if it means we can enjoy a day in "the friendly confines" of Wrigley.) The Banksian catchphrase "Let's play two" was supposed to be inscribed on the statue's granite pedestal, but the carvers of the statue managed to leave out the apostrophe in Let's. After some local uproar, the typo was corrected a few days later. Here are before and after photos. 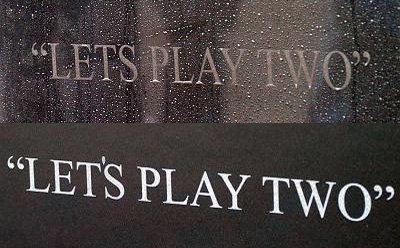 It's not the prettiest correction, since it uses the straight tick known as a "typewriter apostrophe," but at least it didn't require starting from scratch. Making the change on the New York Supreme Courthouse facade will be significantly harder, since there's no straightforward way to change true to due. What's more, the building is protected by the city's Landmarks Preservation Commission, so Washington may be squirming in his grave for a while longer!

Click here to read more articles from Word Routes.
Blog Departments
Announcements Department of Word Lists Success Stories Tips & Tricks Word Routes
Editors Picks:
Um, What Do, Uh, Verbal Blunders Tell Us
September 19, 2007
Michael Erard explains how slips of the tongue reveal the inner workings of language.
A Little Learning...
August 28, 2008
Spelling errors often arise from interference from the patterns of similar words.
Media Missteps
May 15, 2008
"Regret the Error" is a blog that catalogues how the media corrects errors.
Most Popular in Word Routes
A Contretemps over Newspaper Vocabulary
June 25, 2008
Who Are You Calling "Sweetie"?
May 20, 2008
Other Articles About
Politics
For Presidents' Day: Where Did "President" Come From Anyway?
February 15, 2016
Who Are You Calling "Sweetie"?
May 20, 2008
Usage
Webinar, Schmebinar!
August 13, 2010
A Contretemps over Newspaper Vocabulary
June 25, 2008
Vocabulary
Webinar, Schmebinar!
August 13, 2010
Clothing Design Words
February 17, 2007
Writing
A Contretemps over Newspaper Vocabulary
June 25, 2008
Clear and/or Unclear
January 7, 2015