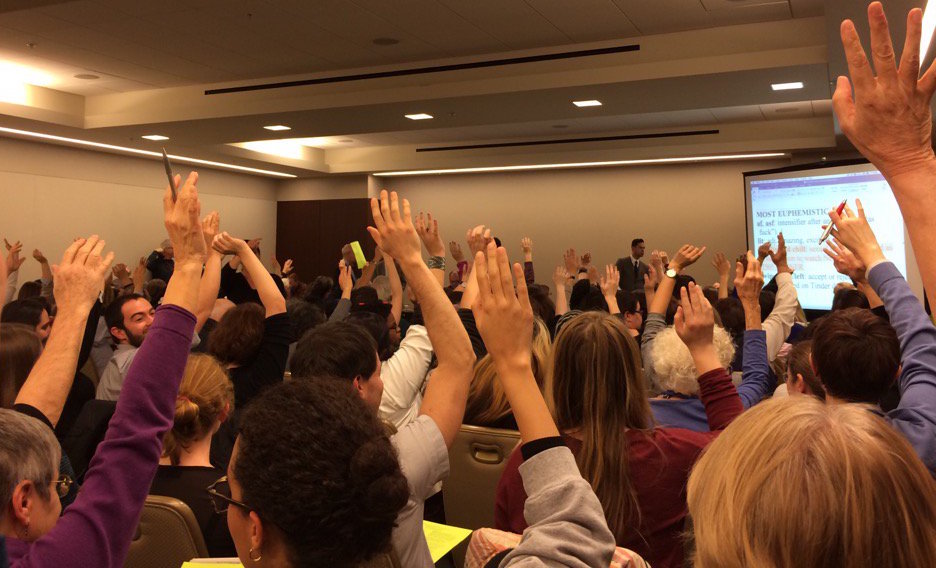 Gathering in Washington D.C. for its annual meeting, the American Dialect Society has made its 26th annual selection for Word of the Year. And as predicted in this space last month, the winner is a lowly pronoun: they used as a gender-neutral alternative to he and she, with special attention paid to its use as an expression of "non-binary" gender identity.

In the absence of a clear frontrunner drawn from politics or current events, they ran away with the competition after a year that saw greater acceptance of the traditionally plural pronoun in use as a singular form. They has long been a kind of stopgap when writers and speakers need a pronoun that doesn't specify gender in order to refer to someone generically, as in "Every person should be able choose the pronoun they want." That more general use of they has been making headway among editorial gatekeepers, as I wrote in the Wall Street Journal last spring and as recently illustrated by changes to the Washington Post style guide.

But the development that made more of an impression on the language scholars who attended the Word of the Year selection was the more conscious choice use of they as a pronoun of personal choice. While many pronouns have been invented as identifiers that transcend the typical gender binary, they is the most straightforward choice for an expression of non-binary identity, as it is already in common use in the language.

In my capacity as the society's Chair of the New Words Committee, I presided over the spirited Word of the Year session. Since the ADS meeting is held in conjuction with the Linguistic Society of America and its other sister societies, we can always count on a large, boisterous crowd, and this year more than 300 attendees crammed into the Marriott Marquis conference room to take part in the WOTY festivities.

Before anointing an overall winner, we first voted on various secondary categories, working off the nomination list prepared in the previous evening's session. The momentum behind singular they was obvious after it won the first category, Most Useful, easily beating out other words like microaggression, referring to a subtle form of racism or other bias.

In the Most Creative category, the winner was ammosexual, a term for someone who loves their guns a bit too much. (Did you catch the singular their there?) The second-place nominee was adult used as a verb, meaning "act like a grownup." Our friend Mignon Fogarty, aka Grammar Girl, picked adulting as her personal Word of the Year for 2014, and it garnered more fans in 2015.

Next in the Most Unnecessary category, the male hairstyle manbun was the big winner. (Man words in general seem a bit unnecessary.) And in the Most Outrageous category, the verb schlong, used by Donald Trump to mean "defeat soundly," got schlonged by an even more outrageous word, f***boy as a derogatory epithet for a man who is overly promiscuous or otherwise objectionable.

There was no contest in the Most Euphemistic category, as it was swept by Netflix and chill, a sexual come-on masked as an innocuous invitation to watch Netflix and relax. Most Likely to Succeed was won by the verb ghost meaning "abruptly end a relationship by cutting off communication, especially online," and Least Likely to Succeed went to sitbit, an imagined device rewarding sedentary behavior (playing on the Fitbit fitness tracker).

Two newly added categories focused on innovations in electronic communication. Last year saw the introduction of the Most Notable Hashtag category (with its winner, #BlackLivesMatter, going on to win the main prize as well). The category was carried over to this year's voting, and it was won by #SayHerName, which was used in a campaign to bring attention to violence against women of color.

Additionally, voters got to make a choice in the brand-new Most Notable Emoji category. While an emoji was not an overall winner as in Oxford Dictionaries' selection, the category nonetheless showcased the often playful ways that people are incorporating emojis into texts, tweets, and other electronic messages. The winner was playful indeed: the eggplant emoji (🍆), whose resemblance to a particular member of the male anatomy makes it an easy target for sexual innuendo.

The evening's voting ended with the main Word of the Year category, and singular they trounced the competition, which included the expression thanks, Obama (typically used in a sarcastic fashion as if any minor problem can be blamed on the President). This wasn't the first time that a pronoun was victorious: in 2000, the American Dialect Society picked she as its "Word of the Millennium." Perhaps they in its singular guise is the word of the new millennium?