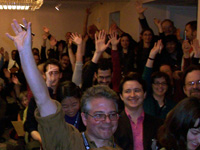 Greetings, everyone! I've just come back from San Francisco, where I attended the American Dialect Society's annual meeting (held in conjunction with the Linguistic Society of America). As is the custom, the linguists and lexicographers in attendance took a break from their scholarly presentations to have some fun selecting the Word of the Year for 2008. This time around, bailout emerged as a powerful frontrunner, and sure enough it ultimately proved to be the winner.

The ADS, despite being a serious-minded learned society, keeps things lighthearted when it comes to the Word of the Year. The WOTY selection is open not just to ADS and LSA members but to anyone from the public, so the conference room was jam-packed with language lovers by the time the voting started on Friday evening.

The previous evening, nominations had been fielded in various categories: most useful, most creative, most unnecessary, most outrageous, most euphemistic, most likely to succeed, and least likely to succeed. The ADS also decided to create a special category this year for election-related words, since terms like maverick, lipstick on a pig, and hockey mom had become such cultural touchstones during the presidential campaign. In this category, maverick beat out lipstick on a pig — helped, perhaps, by memories of Tina Fey as Sarah Palin promising to "get mavericky in there."

The category of "most euphemistic" featured some great nominations from the VT's own Mark Peters, who writes the monthly "Evasive Maneuvers" column about euphemisms old and new. Two euphemisms that Mark had unearthed for our readers ended up in the running for this category: scooping technician (a polite term for someone whose job it is to pick up dog poop) and thought showers (an expression coined by a British city council because brainstorming was thought to be offensive to epileptics). In the end, scooping technician emerged the winner. Hooray, Mark!

In my preview of the WOTY voting last Thursday, I had promised to make a push for shovel-ready in the "most likely to succeed" category. This term, used to describe infrastructure projects that are ready to go as soon as money is available from Obama's proposed stimulus package, exploded in usage during the month of December and shows great promise for '09. My lobbying efforts paid off, as shovel-ready beat out such worthy competitors as Twitter (the microblogging site that allows users to post short messages, or tweets) and [name] the [job] (the flexible template pioneered by "Joe the Plumber" during the campaign). Score two for the VT team — for words having to do with scooping and shoveling, oddly enough!

Winners in other categories included recombobulation area for "most creative" (that's what Milwaukee's Mitchell International Airport calls the area where passengers get reorganized after passing through security) and Barack Obama for "most useful." The usefulness of Obama's name was evident from the multitude of creative coinages made in 2008 using either Barack or Obama as an element: Barackstar, Barackracy, Nobama, Obamanation, Obamamentum, Obamaphoria, Obamarama, and Obamanos (a play on Spanish vámonos), just to name a few.

Finally, nominations were made for overall Word of the Year, but after the first round of voting no candidate received a clear majority. That left "most useful" winner Barack Obama (as a combining form) in a runoff vote with the early favorite, bailout. As you can see from the video clip below, after some final speeches from the floor bailout came out ahead.

As I recounted in an earlier Word Routes column, bailout in the financial sense is nothing new, with the noun form dating back to 1939 and the phrasal verb bail out going all the way back to 1932. But the ADS Word of the Year selection doesn't have to be a new word, just newly prominent, and there's no question that bailout rose to great prominence in the final months of 2008.

You can read more about the selections for different categories in the official ADS press release here. And as promised, here is a video clip of the final voting, presided over by ADS executive secretary Allan Metcalf and New Words Committee chair Grant Barrett.