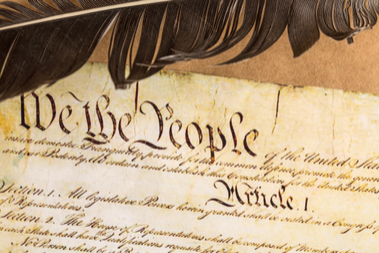 Whether you feel fit as a fiddle as shaky as a leaf, if you're American, you should appreciate September 17: Constitution Day. In that spirit, here's a look at a versatile word with a long history.

This Latinate term comes to English via French, and the earliest known sense — as a religious or political decree, first found in English in the late 1300s — informs the meaning inherent in the U.S. Constitution. In Roman law, a constitution was a decree or order of the emperor, and the Apostolical Constitutions are Christian rules and regulations dubiously said to be derived from Jesus' apostles. In the 1668 book The Blessedness of the Righteous, John Howe asks a question that would sound odd today, and not just because of the missing question mark: "Wouldst thou overturn the laws of nature, and subvert the most sacred divine constitutions." A divine constitution was practically a commandment.

The most common and essential meaning of constitution, first found in the 1500s, is biblical in scope. As the Oxford English Dictionary defines it: "The action of constituting, making, establishing…" Fittingly, the first known example of this sense is from a 1582 translation of the Bible, which describes a time "Before the constitution of the world."

The sense of constitution as referring to the status of a living body also started appearing in the 1500s and is one of many terms equating the body politic to the body of us mere mortals. Thomas Wilson's 1553 book The Arte of Rhetorique offers some wise words: "The temperature of the mynde folowes the constitucion of the bodie." Uncle Sam and Joe Blow are both healthier with a strong constitution.

When it comes to the constitution of a nation, this hardy word can be used literally or loosely, which makes sense, since a Constitution spells out a country's constitution. The OED defines and explains the subtle distinctions:

The system or body of fundamental principles according to which a nation, state, or body politic is constituted and governed. This may be embodied in successive concessions on the part of the sovereign power, implied in long accepted statutes, or established gradually by precedent, as in the British Constitution; or it may be formally set forth in a document framed and adopted on a particular occasion by the various orders or members of the commonwealth, or their representatives, as in the Constitution of the United States, the various Constitutions of France after 1790, and those of other nations, framed in imitation of these. In the case of a written Constitution, the name is sometimes applied to the document embodying it. In either case it is assumed or specifically provided that the constitution is more fundamental than any particular law, and contains the principles with which all legislation must be in harmony.

In other words, there's more to a country's constitution than its Constitution.

Some slight variations of constitution have had long, vigorous lexical lives, such as constitutional. Since the 1600s, uses related to a person's constitution have been common, as in the kinda-redundant constitutional illness. In the 1700s, political uses started popping up, like this example from William Blackstone's 1765 book Commentaries on the Laws of England: "To trace out the constitutional doctrine of the royal succession." Constitutional is a very popular American word that's always in the headlines, including recent stories in the New York Times ("Do Public School Students Have Constitutional Rights?" and The Nation ("Impeachment Is the Cure for Our Constitutional Crisis.")

The most charming use of constitutional might be the sense defined by the OED as "A constitutional walk; a walk taken for health's sake, or for the benefit of the constitution." Additional notes suggest this term was born on English Universities, so apparently 1800s English students were not couch crumpets. The first known use is from an 1829 letter by Charles Darwin, who describes, "An occasional ride with Simcox, and constitutional with Whitley."

I reckon that as long as there's a literal Constitution to amend and a metaphorical constitution to defend, constitution will remain an important word in discussing our country, not to mention our neighbors on this big blue marble. My idea of what constitutes America may not jibe with yours, but the U.S. Constitution gives us some solid guidelines for hashing out the details.