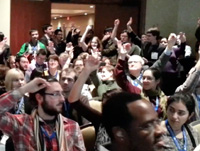 The American Dialect Society has selected its Word of the Year for 2012, and the winner was a bit of a surprise. It wasn't fiscal cliff, the ubiquitous term in the news from Capitol Hill. And it wasn't YOLO, the youthful acronym for "You Only Live Once" that quickly rose (and just as quickly fell) this past year. No, the ultimate champion was that mainstay of the Twittersphere, hashtag.

A hashtag is a convention used on Twitter to organize conversations, mark topics, or make witty commentary, created by appending a word or phrase with the hash symbol (#) preceding it. If you need a primer, check out my Word Routes column about how hashtags have evolved into vehicles of satire and self-mockery, and Dennis Baron's column in which he presciently selected hashtag (or rather #hashtag) as his own Word of the Year.

As Chair of the New Words Committee for the American Dialect Society, I've been actively involved in the WOTY selection process for the last several years. Interestingly enough, in three of the last four years the winning word has come from the tech world: we picked tweet for 2009 and app for 2010. (The winner for 2011 was occupy.) And as was the case with tweet and app, hashtag ultimately was the Society's choice despite not being on the initial list of nominations, receiving a groundswell of support at the end.

The ADS met this year at the Boston Marriott Copley Place, in conjunction with the Linguistic Society of America. Many LSA members and other interested onlookers joined us, filling up a hotel ballroom with more than 200 seats. As usual, it was a spirited affair, full of impassioned lobbying for and against different nominees.

ADS executive secretary Allan Metcalf kicked off the proceedings, moving swiftly to the first category: Most Useful. YOLO seemed like a strong choice, considering the many uses that it has inspired, as an excuse for bad behavior or as a sarcastic, self-referential commentary on the whole YOLO phenomenon. But after a runoff, YOLO lost out to -(ma)geddon and -(po)calypse, which were paired together for their uses as combining forms (derived from armageddon and apocalypse) to describe various calamities in hyperbolic terms.

In the Most Creative category, mansplaining (what happens when a man condescendingly explains something to female listeners) was the subject of much debate. Though the word was generally favored, some felt that it wasn't quite "creative" enough, since it simply grafts the man- prefix in the same way as such words as mancation and manscaping. Ultimately, mansplaining was defeated in a runoff against gate lice, an evocative term for passengers who crowd around an airport gate when a plane begins boarding.

Words (and phrases) can be nominated in multiple categories, and such was the case for legitmate rape, the notorious expression used by Todd Akin in his bid for a Senate seat in Missouri. Legitimate rape was nominated in both the Most Unnecessary and Most Outrageous categories, and it handily won both contests. Another clear favorite came in the Most Euphemistic category: self-deportation, the policy (favored by candidate Mitt Romney) of encouraging illegal immigrants to return voluntarily to their home countries.

Next came one of the more glamorous categories: Most Likely to Succeed. There were many worthy contenders, including fiscal cliff, superstorm, and big data. But the big winner was marriage equality, which has come to be the accepted term for discussing the growing legal recognition of same-sex marriage in the United States. In the Least Likely to Succeed category, YOLO was again nominated and ended up as a co-winner (or co-loser) with phablet (a device that's not quite a phone and not quite a tablet), as they were separated by a mere one vote in the runoff.

As we've had in past election years, we added a special category of election-related words, including such choices as 47 percent, Etch-a-Sketch, Eastwooding, and malarkey. But a nomination from the floor secured a win for binders (full of women), the term used by Romney in the second presidential debate to describe the resumes of female job candidates that he consulted as governor of Massachusetts.

Finally it was time to make nominations for the overall Word of the Year. The slate filled with some expected choices, such as YOLO, fiscal cliff, 47 percent, and Gangnam style. But it came down to a runoff between the Most Likely to Succeed winner, marriage equality, and a new nominee: hashtag. Though hashtag has been around for a few years now (first used on Twitter in 2007), it's fair to say that 2012 was the Year of the Hashtag. Hashtagging became so popular that the practice spread to other social media, and hashtag could sometimes be heard in oral use introducing a snappy metacommentary on what had just been said. And as Dennis Baron pointed out, this was also the year that a baby was named Hashtag.

With WOTY 2012 behind us, we can start looking forward to what might be selected for 2013. I'll make an early prediction: while 2012 brought us superstorm (as in Superstorm Sandy), 2013 is going to introduce us all to another super natural phenomenon: supercomet!

Finally, here's a video of the end of the WOTY session, from my perspective as a vote-counter.