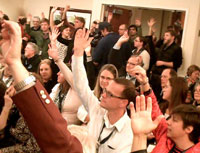 As the selection of the American Dialect Society's Word of the Year approached, a certain air of inevitability had begun to surround occupy, the word revitalized by the Occupy protest movement. And sure enough, when the assembled throngs met in Portland, Oregon, where the ADS held its annual meeting in conjunction with the Linguistic Society of America, occupy emerged victorious as the Word of 2011.

Long-time readers will know that I've given my reports from the center of the WOTY action for a few years now (2008: bailout, 2009: tweet, 2010: app). I've become increasingly more involved in the proceedings, and I now serve as chair of the New Words Committee for the ADS. In this capacity, I oversaw the nominating session on Thursday evening — you can read the full list of nominees that we came up with here, filling out various categories from Most Useful to Most Outrageous.

But as usual, the real fun for the WOTY-watchers came the following evening, when members of the ADS and LSA (and anyone else interested in attending) gathered for the main vote. There must have been more buzz about the selection than usual this year, as the attendance was record-breaking. Last year we had about 125 people in attendance, but this year the number was at least twice that. We managed to get everyone seated in the conference room, and after some technical snafus with the data projector we were on our way. (The projector was ably manned by Grant Barrett, who kept track of the votes on the screen when he wasn't typing snarky asides to keep the crowd entertained. Seated next to Grant, Jesse Sheidlower nimbly live-tweeted the event on the American Dialect Society Twitter feed.)

Without further ado, Allan kicked off the Most Useful category, where nominees included occupy, humblebrag (expression of false humility, especially by celebrities on Twitter), FOMO (an acronym for "Fear of Missing Out," describing anxiety over being inundated by information on social media), and tablet (lightweight portable computer with a touchscreen to input data). I was pleased that humblebrag, a personal favorite, came out the winner in this category, after a runoff with occupy. The O-word would of course have its moment later on.

In the Most Creative category, the choices were colorful, to say the least: bunga bunga (name for sex parties allegedly involving former Italian Prime Minister Silvio Berlusconi), kardash (unit of measurement consisting of 72 days, after the short-lived marriage of Kim Kardashian and Kris Humphries), and Mellencamp ( a woman who has aged out of being a "cougar," after John Cougar Mellencamp). In an homage to our host city, space was also made for the expression "put a bird on it" (to make something more artistic, from the television show Portlandia, which lovingly satirizes Portland residents). Though most of us had never heard of it before it was nominated, Mellencamp elicited the most chuckles and won the category.

Then it was on to Most Unnecessary, with such nominees as planking (posing for a photograph, esp. in a public place, with one's body in a stiff, prone position), bi-winning (Charlie's Sheen prideful term, used to dismiss accusations of being bipolar), and amazeballs (a slang form for "amazing"). An added nomination came from the floor: Qwikster, the short-lived Netflix spinoff for DVD rentals. The Sheenism bi-winning took this one handily.

For the Most Outrageous category, we considered deather (one who doubts the official story of the killing of Osama bin Laden), botoxionist (a doctor who administers Botox injections), and assholocracy (rule by obnoxious multi-millionaires). The last of these was championed by Geoffrey Pullum, chair of linguistics at the University of Edinburgh, who had lobbied for it in a post on Language Log (where I also contribute). Geoff's eloquence won the day, as his choice swept the category.

We moved on to Most Euphemistic, with nominees including artisan(al) (the faux-fancy term used to describe food and other products), job creator (a member of the top one-percent of moneymakers), and regime alteration (alternative to "regime change" promoted by Obama administration in some Middle Eastern countries). I put in a late nomination on behalf of our own Mark Peters, who had suggested the immortal phrase, sugar-coated Satan sandwich. But it was job creator that won this one.

Next, we mulled over candidates for Most Likely to Succeed: Arab spring (popular uprisings in Middle Eastern countries), cloud (online space for the large-scale processing and storage of data), and tiger mom or tiger mother (an exceedingly strict parent, after Amy Chua's memoir, "Battle Hymn of the Tiger Mother"), with cloud winning the vote. On the flip side, the Least Likely to Succeed category was won by brony (an adult male fan of the "My Little Pony" cartoon franchise), beating out Tebowing (posing for photograph praying on one knee, after Denver Broncos quarterback Tim Tebow), and 9-9-9 (the tax plan proposed by Herman Cain, with 9% business tax, 9% personal income tax, and 9% federal sales tax).

We had so many words and phrases coming out of the Occupy movement this time that we felt that they merited their own category. Interestingly enough, occupy didn't win in the Occupy category, with the vote instead swinging to the 99% or 99 percenters (those held to be at a financial or political disadvantage to the top moneymakers, the one-percenters). Also-rans included people's mic or human microphone (method of amplifying a person's speech by having surrounding people repeat it line by line) and twinkling (system of wiggly hand gestures to register approval or disapproval).

With the lesser categories out of the way, we moved on to the main Word of the Year selection, opening it up to the floor for nominations. Both occupy and the 99% were nominated, along with humblebrag, FOMO, and job creator. Scott Kiesling of the University of Pittsburgh made a case for FOMO: saying that "this is what it's like to be a citizen of the United States now." Gregory Guy of New York University countered, saying "I'm older, and I just consider it an annoying personal shortcoming." (Grant typed "BURN!" on the screen after this bit of repartee.) Geoff Pullum, meanwhile, shifted his vote to humblebrag, in a faux-magnanimous gesture that perfectly illustrated humblebragging.

Humblebrag did not do as well in the first round of voting as occupy, FOMO, and the 99%, which went to a runoff. Some further lobbying for occupy followed, with one person wondering, "We had a whole Occupy category — how can we not choose it?" (Grant typed, "Logic has no place in language.") Finally, the runoff vote was held, and occupy won, as so many had anticipated (including me, back in October). Despite the predictability of the final result, we sure had an entertaining time getting there.

I helped out counting the votes, and at the same time I also recorded some shaky video, as I've done in past years. Here it is, capturing the debate and voting for the main Word of the Year category.