The makers of the critically acclaimed TV drama "Mad Men" pride themselves on their meticulous attention to authentic period detail, lovingly recreating the early 1960s world of Madison Avenue admen. The show's prop masters are charged with getting every little thing right, from the prices on receipts to the secretaries' restrictive undergarments. So it's always a bit of a surprise to discover an anachronism lurking on the "Mad Men" set. The most recent episode featured one such historical goof, though only die-hard dictionary buffs would have noticed.

The current season of "Mad Men" is set in 1963, following two seasons set in 1960 and 1962 respectively. The ad agency at the heart of the show, Sterling Cooper, has been sold to a British agency, Putnam Powell & Lowe. Overseeing things at their newly acquired New York outpost is Putnam's financial officer, Lane Pryce (wonderfully played by Jared Harris). Pryce has decorated his office with some distinctly British accessories, including a suit of armor. In the latest episode ("Love Among the Ruins"), we see another decorative touch on the credenza behind Pryce's desk. 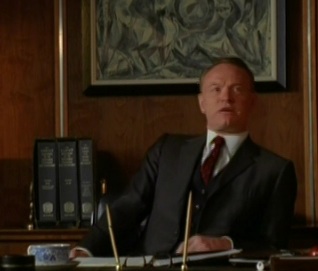 Lexicographical cognoscenti will immediately identify the three-volume work as The Compact Edition of the Oxford English Dictionary. The Compact Edition is a micrographic reproduction of the OED, with each page making room for four reduced pages of the original. A magnifying glass is handily supplied to avoid damaging the reader's eyesight. The only problem is, there was no Compact Edition in 1963. It was first published as a two-volume edition in 1971, but what we see in Pryce's office is even more anachronistic: it's the edition published in 1987 with Robert Burchfield's supplement to the OED in a third, slimmer volume. (Even after the 1987 edition was published, book clubs continued to sell the original two-volume version for bargain prices. Like many Americans, I was first exposed to the OED through one of these book club editions, squinting through the magnifying glass at the tiny type.) 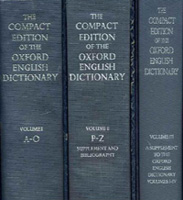 Orion Montoya, chief computational lexicographer at Wordnik (and a former colleague of mine at Oxford University Press), was quick to spot the error, even posting about it on his Twitter feed shortly after the episode aired. Orion speculates that the set designers might have noticed the OED's original publication year of 1933 that appears on the edition's facsimile pages, without realizing that the Compact version didn't appear until much later.

A 24-year error like this one is certainly an embarrassment for the "Mad Men" production crew, but only because they have held themselves to such a high standard of historical accuracy. In this video you can see prop master Gay Perello explain the lengths they went to for certain TWA-related items used in the first episode of the third season, including getting into an eBay bidding war for a pin worn by TWA flight attendants in the early '60s. And another prop master explained in a featurette for the Season One DVD how they decided to remove an Etch-A-Sketch from a particular scene after discovering that the toy wasn't released until the summer of 1960, a few months after the episode took place. 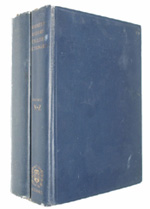 So what should they have used instead of the Compact OED to adorn Lane Pryce's office? Even though he has apparently lugged a suit of armor across the Atlantic, it seems unlikely that Pryce would have brought over the 13-volume full-size edition that was available to dictionary consumers at the time. Rather, a better bet would have been the Shorter Oxford English Dictionary, an abridged two-volume work that was a highly office-appropriate reference for the discerning British reader. (A 1959 edition is pictured to the right.)

Orion notes that if the makers of "Mad Men" had really wanted to evoke the era by means of a dictionary prop, they could have worked a copy of Webster's Third New International Dictionary into the set somewhere. Published in 1961, Webster's Third was seen by many at the time as radically permissive. It surely wouldn't do in Mr. Pryce's office, but one can easily imagine it on the desk of the socially progressive (and rather pompous) copywriter Paul Kinsey. The times they were a-changin', in the dictionary world just as much as the world at large.

[Update #1: Lane Pryce himself has responded, or at least his Twitter persona has! Summoning a well-known time-traveler from the '80s, Mr. Pryce tweets, "Regarding my office library, I was asked to hold onto those books by a nervous young man named McFly." Anachronism upon anachronism...]

Click here to read more articles from Word Routes.
Blog Departments
Announcements Tips & Tricks
Editors Picks:
Noah Webster at 250: A Visionary or a Crackpot?
October 16, 2008
Dennis Baron assesses the legacy of the groundbreaking American lexicographer.
Inside the OED, Part 1: The Wisdom of Crowds
July 30, 2008
OED editor at large Jesse Sheidlower discusses the dictionary's reliance on volunteer readers.
Inside the OED, Part 2: Expanding Electronically
August 6, 2008
Jesse Sheidlower reveals how the OED has adapted to the digital age through its online edition.
Inside the OED, Part 3: Across the Alphabet
August 14, 2008
In the last part of our interview, Jesse Sheidlower explains how OED editors are revising entries across the alphabet.
Other Articles About
Media
Nerding Out on "Nerd"
April 24, 2018
The Royal Lexicon of "Black Panther"
February 14, 2018
Dictionaries
Introducing Vocabulary.com's New Dictionary Design!
January 28, 2021
The Evasion-English Dictionary: A Smart Bomb Aimed at Sneaky, Self-deluded Language
August 31, 2018