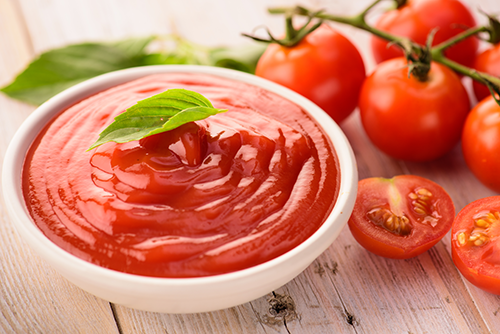 Summer is cookout season, and chances are that whatever's on the menu, there will be ketchup on the table.

97 percent of Americans have a bottle in their fridges, and it's one of the top-selling condiments of the last hundred years. Just about everyone enjoys its combination of sweet, sour, and savory flavors on something, and it's as familiar as food can be. But where did the word ketchup come from?

Fermenting fish into sauces goes back millenia in Asia, with records showing the practice well-established in China and Southeast Asia 2300 years ago. Countries all over East and Southeast Asia still use fermented fish and shrimp sauces as an essential basis for their cuisines; the amino acids that result from fermentation have tons of umami, the "fifth taste," which imparts a meaty deliciousness to food and enhances other flavors.

Hokkien is a language spoken in southeastern China's Fujian province, as well as in Taiwan and in Chinese diaspora communities throughout Asia. In the Amoy dialect of Hokkien, also known as Xiamen after the biggest city in the area, 17th-century records show a sauce made from fermented fish and spices called kôe-chiap or kê-chiap. A reference to "Catchup, a high East-India sauce" appears in a popular dictionary of British slang from 1690.

The condiment proved popular, and within a few decades it had travelled to Malaysia. The Malay version of the name was kicap or kecap, pronounced "ket-chap." Indonesian cuisine today still uses a sweetened soy-based sauce called kecap manis. British colonists enjoyed kecap and brought it home, carrying it on to America as well. Spellings varied, though the current ketchup appears fairly early along with several variants, one of which, catsup, is still used in parts of the American South and in Mexico.

Early western versions of the condiment in both Britain and America were made from a wide variety of base foods, ranging from mushrooms to walnuts to oysters cooked down with salt , spices and anchovies. By the early nineteenth century, a tomato-based version had emerged, and by the middle of the century it was quite popular in the U.S. Tomatoes contain significant amounts of glutamic acid, one of those umami-rich compounds present in the original fish sauces, and they spoil quickly if they're not preserved, so they made a logical choice.

In Britain, the word ketchup is used, but it's also often called tomato sauce, which sounds confusing if you're a fan of Italian food; in North America tomato sauce goes on pasta and pizza, not French fries. Many parts of the U.K. refer to ketchup as red sauce in order to distinguish it from brown sauces like HP and A1 — which are also westernized versions of Asian condiments, but that's another story. In 1876, Henry Heinz developed his recipe for the ketchup we all know, and that spelling mostly became standard, though an American dictionary entry from 1913 still uses the catchup spelling.

We're running down the origins of some summer-related words. Here are a few more:

Meat Your Maker: The Origins of "Barbecue"

Blanket Statement: The Origins of "Picnic"