New Orleans is widely acknowledged as the birthplace of jazz. But is it also the birthplace of "jazz" — that is, the name for the music and not just the music itself? New evidence shows that the term jazz, also spelled jas or jass in the early days, was in use in New Orleans as early as 1916. However, that doesn't beat Chicago, where the term was applied to music in 1915. And while many of the Windy City's early jazz musicians hailed from New Orleans, Chicago likely borrowed the word jazz from another city: San Francisco.

In San Francisco in the early teens, jazz wasn't yet used to refer to the new syncopated music emerging out of the ragtime tradition. Instead, it cropped up as a synonym for "pep, vim, vigor," particularly in baseball circles. The San Francisco Bulletin sportswriter E.T. "Scoop" Gleeson explained the term in a March 6, 1913 report from the spring training camp of the San Francisco Seals, a minor-league team in the Pacific Coast League:

Everybody has come back to the old town full of the old "jazz" and they promise to knock the fans off their feet with their playing.
What is the "jazz"? Why, it's a little of that "old life," the "gin-i-ker," the "pep," otherwise known as enthusiasalum. A grain of "jazz" and you feel like going out and eating your way through Twin Peaks. It's that spirit which makes ordinary ball players step around like Lajoies and Cobbs.

The earliest known use of jazz in the context of West Coast baseball actually appeared a year earlier. Ben Henderson, a pitcher for the Portland Beavers (another Pacific Coast League team), dubbed a lively pitch his "jazz ball," according to the Los Angeles Times of April 2, 1912. But it was in the reporting of "Scoop" Gleeson that the term caught on, with other Bay Area sportswriters following his lead.

Gleeson had picked up the term at the Seals training camp in Boyes Springs, a resort town in the Sonoma Valley. The baseball-music jazz nexus evidently came about because of a band that Seals management hired to entertain the team during spring training. The band was led by Art Hickman, and his banjoist, Bert Kelly, would go on to found his own band in Chicago. Later in life, Kelly claimed that his band, begun in 1914, was the first to call itself a "jazz band." His connection to the "jazzy" San Francisco Seals makes his story quite believable, though no direct evidence has yet been found to verify his claim.

The first known printed usage of jazz to refer to music appears in a Chicago Tribune article from July 11, 1915, entitled "Blues Is Jazz and Jazz Is Blues." Gordon Seagrove (later a prominent ad executive) wrote an account of a Chicago club where "jazz blues" was played. Over the course of 1916, the jazz bug spread to other cities, and in 1917 it became a national phenomenon, thanks to the success of the Original Dixieland Jass Band and others who made recordings labeled jazz (or jas or jass). 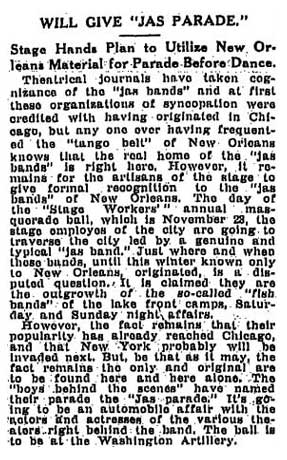 So where does New Orleans fit into all of this? There's no doubt that New Orleans-born musicians were largely responsible for the jazz trend in Chicago and elsewhere. The question remains, when did the word start getting used in New Orleans, as opposed to earlier terms like ragtime? The Historical Dictionary of American Slang provides a quotation from the New Orleans Times-Picayune of June 20, 1918, referring to "jass bands" and "jass music." That, of course, is very late in the game, well after the nationwide explosion of jazz in 1917.

Fortunately, the Times-Picayune has recently been digitized as part of America's Historical Newspapers (a database available from the Readex division of NewsBank). Using these newly available resources, I was able to find an earlier reference to "jas bands" in the Times-Picayune, from Nov. 14, 1916 (still more than a year after the Chicago Tribune article).

The article explains that the stage hands of New Orleans' theaters were preparing for their annual ball, and that they planned a "jas parade" as part of the festivities. The writer takes the opportunity to give New Orleans the proper credit for the origination of "jas bands": "Any one ever having frequented the 'tango belt' of New Orleans knows that the real home of the 'jas bands' is right here."

That may very well be, but it's still unclear what role New Orleans might have had in the early development of jazz as the name of a musical genre. If Bert Kelly's story is to be believed, he brought the term with him from San Francisco to Chicago, and the role of New Orleans was peripheral at best. Such a narrative might not satisfy boosters of the Big Easy, but until earlier evidence can be found, credit for jazz will remain with Chicago, assisted indirectly by the peppy baseball players of San Francisco.