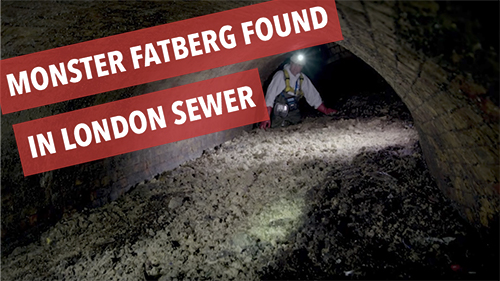 Even the daintiest of us has probably plugged a toilet at some distressing point. With luck, it wasn't at a friend's house or Buckingham Palace.

But not far from the opulent splendor of Westminster, far beneath the East End of London, a far more embarrassing and monstrous blockage has been found: a fatberg. This colossal clump is made of diapers, baby wipes, oil, and — you guessed it — fat. The dimensions are gleefully described in several recent headlines, as Slate proclaimed, "A Glorious 145-Ton 'Fatberg' Has Been Found Beneath London," and the Washington Post added, "This 'fatberg' clogging a London sewer is longer than two football fields, weighs more than 11 buses." Hey, we could all stand to lose a few pounds.

Part of the fatberg may end up in the Museum of London — if they figure out how to improve the smell. In any case, London's megaturd is a decisive validation of those warnings about what not to flush as well as a reminder of the history of berg and its parent word iceberg. With language, there's always a lot going on beneath the surface.

Fatberg feels like a fresh internet coinage along the lines of gloatrage or humblebrag, but it isn't brand new. The Oxford English Dictionary (OED) already records this mostly British word, defining it as, "A large lump or mass consisting chiefly of cooking fat which has congealed and hardened after being poured down a domestic drain." The always dry OED then explains the most common type: "a very large mass of solid or compacted waste found blocking a sewage system." The earliest known use is from a 2008 issue of The Birmingham Post, which describes a trashy scene and a possible word-coiner: "An initial display of photographs showing some of Britain's mounting tide of rubbish in situ (particularly memorable are the large, rock-like lumps of cooking fat [Alistair] Grant calls 'fatbergs', washed up on Newborough Beach)."

Fatberg is a play on iceberg, which is likely derived from the Dutch ijsberg. The earliest English uses in the late 1700s refer to a glacier that has the appearance of an ice mountain. Soon after, the contemporary sense of an icy piece of a glacier is found in the lexical seas. Back in the 1600s, an iceberg was called an ice-island or island of ice. Other synonyms have included ice rock, mountain of ice, and shoal. The common phrase tip of the iceberg is just over a century old according to the OED. The earliest known use is from the American Journal of Sociology in 1916: "We have to recognize that after all reason in men is only the very tip of their iceberg of mental life." Too true, unfortunately.

A few variations and additional meanings are out there. Iceberg has referred to a metaphorical cold fish since the nineteenth century. Charles Spurgeon's 1882 book The Treasury of David makes a generalization that's common when referring to professorial or Spockian types: "We neither care for devout dunces nor for intellectual icebergs." Since the 1800s, iceberger has also referred to either a chilly person or someone who sails into iceberg-heavy waters. Iceberg droppings are rocks within an iceberg that end up on the ocean floor after thawing. Icebergship is a rare but wonderful word for indifference. And let's not forget the much-maligned iceberg lettuce.

Berg has been an abbreviation for iceberg since the 1800s, and sometimes spawns new words. A berg-field is an area full of icebergs. Charles Henry Davis, in 1876's Narrative of the North Polar Expedition, user a contemporary-sounding adjective in the phrase, "A considerable bergy mass of ice." Parts of an iceberg that break off are called bergy bits. In a different but related branch of the etymological tree, berg has been a word for a mountain in South Africa since the mid-1800s. This term also has Dutch roots and a relationship to the British barrow, another word for a hill or mountain.

As for fatberg, like any novel term, people had fun with it on social media. In a discussion of new Stephen King adaptation It, cartoonist Tom Tomorrow said, "I have not seen the movie or read the book but maybe the clown is really a giant fatberg." In response to the BBC News headline, "Monster 'fatberg' found blocking east London sewer," Mollie Goodfellow (@hansmollman) wrote, "Please, Monster Fatberg was my father." Rocky Mountain Mike (@RockyMntnMike) asked, "Isn't Fatberg the new Austin Powers villain?" Steve Yaeger (@SteveYaeger) had a reasonable expectation: "If 'Whitechapel Fatberg' isn't a band in Boston by the weekend I'll be disappointed," while @Shaking_Bacon had a similar thought: "'Fatberg' is my band name. 'Fatberg Update' is the name of its cover band."

Few words are as vividly, humorously monstrous as fatberg. Headline writers, perhaps bored with the usual disasters had a little fun with this story, even at The New York Times, which used language that could double as copy for a horror movie: "Sewer in London's East End Menaced by Giant Fatberg." Let's hope that horror movie becomes a reality. We've had five Sharknados. I reckon we deserve one Fatberg: The Reckoning.

Click here to read more articles from Word Routes.
Blog Departments
Announcements Department of Word Lists Success Stories Tips & Tricks Word Routes
Editors Picks:
How Did the Proof Get in the Pudding?
August 30, 2012
The Story of "Boondoggle": A Useful Word for Useless Work
September 22, 2015
How Did We Get the "Heebie-Jeebies"?
July 29, 2015
Other Articles About
Fun
This Old House: Dom- Sweet Dom-
April 27, 2020
Embrace the Clumsy Vocabulary of National Awkward Moments Day
March 18, 2020
Language
Introducing Vocabulary.com's New Dictionary Design!
January 28, 2021
It's Everywhere You Don't Want To Be: "Pandemic"
August 27, 2020
Media
Nerding Out on "Nerd"
April 24, 2018
The Royal Lexicon of "Black Panther"
February 14, 2018
Word Origins
It's Everywhere You Don't Want To Be: "Pandemic"
August 27, 2020
A Shot in the Arm: The Origins of "Vaccine"
August 12, 2020