For those who like their wordplay competitive, this weekend featured two high-stakes contests: the American Crossword Puzzle Tournament and the first-ever Symmys Awards for the year's best palindromes. The top contenders at the ACPT were the same names that have dominated the crossword world for the past few years, while the surprise overall winner of the Symmys was a palindromic novice.

Before the ACPT got underway at the Brooklyn Marriott, I thought that this might be the year that we'd see a new face in the finals, but just as it was in 2011 and 2012, the Division A finalists who got to go for the gold were the familiar lineup of Dan Feyer, Tyler Hinman, and Anne Erdmann. Despite the plethora of talent at the top of the leaderboard, the Feyer-Hinman-Erdmann trifecta simply overpowered the other 600 or so contestants for the third straight year. So on Sunday it was déjà vu all over again, as we saw the trio ascend the stage to solve the final puzzle on whiteboards, donning their noise-blocking headphones in front of a packed ballroom of eager onlookers.

ACPT organizer and New York Times puzzlemaster Will Shortz announced that it was Anne's birthday, and the crowd cheered on the birthday girl, who had been mired in third place since 2010 (otherwise known as the dawn of the Feyer Era). When the three started on the championship puzzle, constructed by Kevin Der with some ridiculously tricky clues, it was Tyler who got the fastest start. But Dan and Anne slowly overtook Tyler, who was left floundering with much of the left side of the grid failing to fall. Dan overcame his early hiccups to power through to yet another first-place finish, but this time it was Anne who came in second, her all-time best. Her expression of surprise as she saw that she had outpaced Tyler, a five-time champ, was delightful.

Time ticked away, and still Tyler was stumped. He entertained the crowd by dancing a little jig as he wrote in some random words expressing his frustration like "BLAST" and "UGH." Nearing the 20-minute deadline, he finally closed in on his last empty corner, but time expired before he could finish. With the pressure off, he finished off the puzzle as the crowd cheered, and Tyler flung his marker into the crowd. (Full disclosure: my six-year-old son Blake ended up with the marker as his souvenir of an exciting final.) [Update: I've added videos of the finals at the end of the column.] 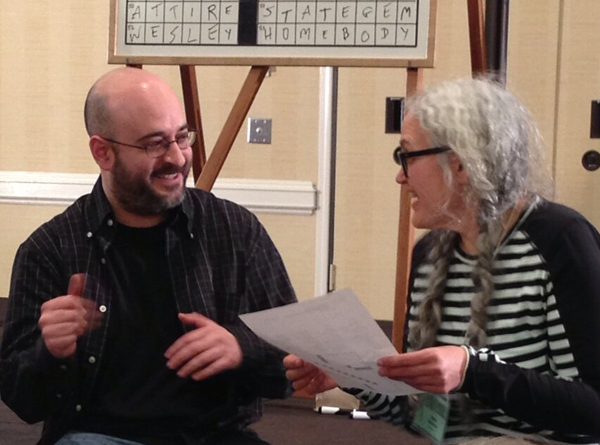 Meanwhile, in Portland, Oregon, Palindromist Magazine editor Mark Saltveit was announcing the winners of the Symmys Awards on the palindromic date of 3/10/2013. Entrants from around the world had submitted palindromes in four categories: short palindromes, long palindromes, poetry, and word-unit palindromes. I was on a panel of judges voting for our favorites via e-mail, along with such luminaries as the aforementioned Will Shortz, Weird Al Yankovic, and Demetri Martin. The winner in the short palindrome category was "An Igloo Dialogue" by John Agee, a writer and illustrator who has penned four books of palindromes:

An igloo costs a lot, Ed! Amen.
One made to last! So cool, Gina!

There was a tie for first in the poetry category between Martin Clear and the pseudonymous Anne Tenna, who claims to be a direct descendant of the Victorian master palindromist Edwin Fitzpatrick. Martin's "Pure Veener From an Enemy" was in sonnet form, believe it or not:

“Ten nosy men, enamor-free, never upstir
Even satin opuses”, says some gal
Lips parted inside dire droops: award to her
USA’s award: nuts, goddess, I know I shall!
A wisp of UFO warding is all it sees
Zones I rate got some medic I used on mode
Robots sap some memos and see bees
DNA some memos pass to boredom node.
Suicide memos to get a risen Oz
See, still a sign I draw of UFO psi
Wallahs I won kissed dogs; tundra was
A sure hot draw as poor derided I.
Snide traps pillage mossy asses upon it
As never its “pure veneer from an enemy” sonnet.

Doom? Reward?
A maniac ire made target.
Ah, a mix — a mania, terror on Ohio.
I honor or retain a maxim:
"A hate grated America in a mad, rawer mood."

In the word-unit palindrome category (in which the words rather than the letters are reversible), a newcomer from Indianapolis named Aric Maddux emerged victorious. Maddux is a published poet, but he had never tried his hand at palindroming before making his impressive submission:

You swallow pills for anxious days and nights, and days, anxious for pills, swallow you.

The judges were asked to pick an overall favorite, and Maddux's "pills" entry was the clear winner in our voting. Thus, a newbie in the palindrome world pulled off the upset and was named by Saltveit as the grand-prize winner. Composing high-quality palindromes, it appears, is an easier field to break into than the upper echelons of competitive crossword-solving.

Update: You can watch the ACPT finals in the following two videos. The sparkling play-by-play commentary is by Greg Pliska and Ophira Eisenberg.