At the 2015 American Crossword Puzzle Tournament, it came down to a neck-and-neck battle between Dan Feyer and Tyler Hinman, the two titans of speed-solving. And in an absolutely heart-stopping finish, Dan beat Tyler by half a second.

Ten years ago, 20-year-old Tyler Hinman won his first ACPT crown, in a dramatic victory captured in the documentary Wordplay. Tyler went on to win five titles in a row and seemed indomitable.

But along came Dan Feyer, with a speed at solving like no one had ever seen. Dan reeled off five victories of his own. Going into this year's tournament, Tyler was intent on putting an end to Dan's streak.

Could Dan be stopped? He sent out an impressive warning shot solving the first puzzle of the tournament with blazing speed. It was relatively easy, equivalent to a Monday puzzle in the New York Times, a way for solvers to get warmed up. Dan solved it in under two minutes, a feat that had never before been accomplished in the tournament's 38-year history.

To make it into the finals, which matches up the top three competitors solving on big whiteboards as the crowd watches on, Tyler needed a strong showing on the tournament's seventh puzzle. Before that, he had been lagging in fourth place, but after beating the room handily on the Sunday-sized puzzle #7, he vaulted into second place, in a virtual tie with perennial finalist Howard Barkin and just behind Dan in the point totals.

By virtue of leading the other two by fifty points going into the finals, Dan was awarded a five-second head start on the championship puzzle (created by Byron Walden, who also made the devilish final crossword ten years ago featured in Wordplay). That might not seem like much, but this year it made all the difference.

The crowd of about 500 watched as Dan got off to an early start, but a lull in his progress allowed Tyler to make up ground. As both started to fill in their final squares, it became clear that it was going to go down to the wire. They had been given 20 minutes to solve it (with those crucial five extra seconds for Dan), and as the clock counted down to 12:52 remaining, Dan's hand shot up first. Tyler's hand went up one heartbeat later, with 12:51 on the clock.

Tyler's actual solving time was about seven minutes and nine seconds, or about four seconds faster than Dan. But the head start that Dan had earned allowed him to pull out the tightest victory anyone had ever seen.

The competitors themselves were as surprised as anyone. Dan gasped, as Tyler comically collapsed on the platform, as if the rivalry had sapped the life out of him. 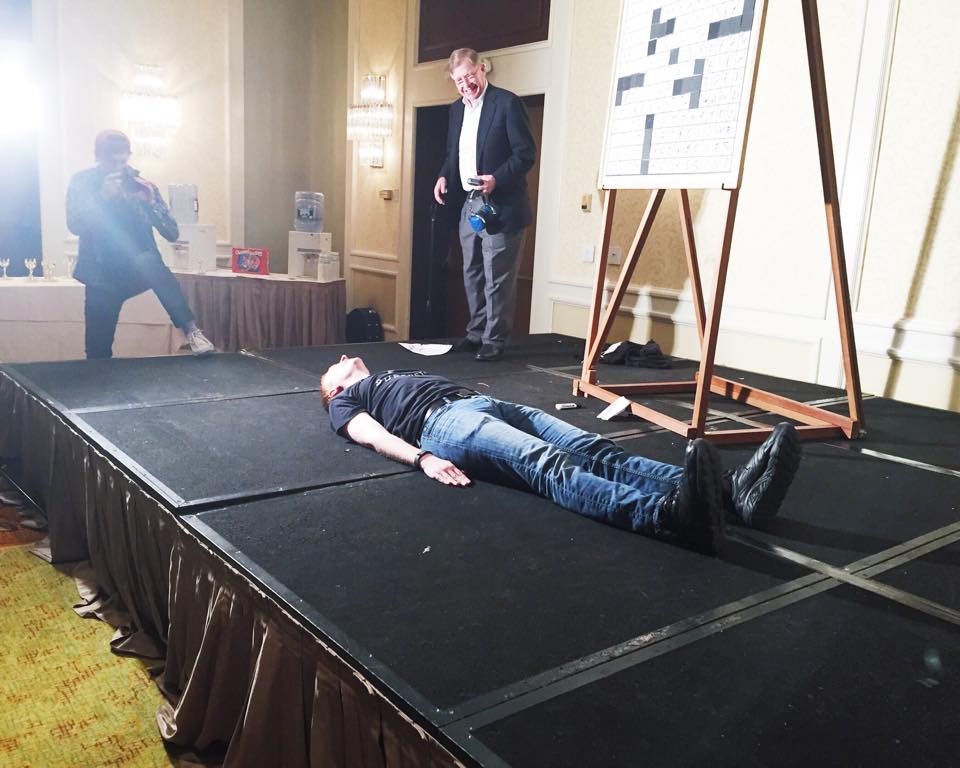 The 2015 tournament marked a return to Stamford, Connecticut, the home of the ACPT from its inception in 1978 until 2007, when it moved to Brooklyn. Tournament director and New York Times crossword editor Will Shortz had moved the competition out of Stamford because it was attracting larger crowds after the release of Wordplay.

The return to Stamford was a nostalgic affair for many long-time solvers, and it yielded a result just as dramatic as the one seen a decade ago, when Tyler came out of nowhere to win. Tyler is 30 now, though he seemed to age another decade on that ballroom stage when Dan edged him out. Hearty congratulations to the both of them for creating such an unforgettable crosswording moment.