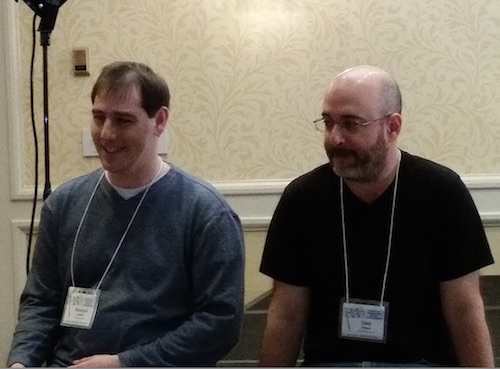 While college basketball fans may be marveling at the exciting upsets of March Madness, the world of competitive crossword solving has experienced a major upset as well, as six-time reigning champion Dan Feyer was dethroned in the American Crossword Puzzle Tournament, losing out to first-time champ Howard Barkin of Hillsborough, NJ.

Nearly 600 contestants gathered in the Marriott ballroom in Stamford, CT this past weekend to partake in the annual crosswording ritual, presided over by New York Times puzzle editor Will Shortz. For more than a decade, the championship has been dominated by two big names. Tyler Hinman first won in 2005 (as captured in the riveting documentary Wordplay) and rattled off five consecutive wins. But then along came Dan Feyer, who managed to win six consecutive championships from 2010 to 2015. After last year, Feyer was one title away from tying the record for most victories, as Jon Delfin won seven times in the pre-Hinman/Feyer era.

This year, Feyer came in to the tournament as the prohibitive favorite once again, and he got off to a predictably fast start. The first of the seven tournament puzzles leading up to the championship is typically the easiest (approaching a Monday-level New York Times puzzle), and five solvers managed to blaze through it in less than three minutes: Feyer and Hinman, along with two perennial finalists, Howard Barkin and Anne Ellison, and one young newcomer, David Plotkin, a graduate student in entomology. By the end of the six puzzles on Saturday, Hinman and Ellison had been felled by errors in their submitted grids, and they both dropped in the standings. Feyer sat atop the rankings as usual, followed by a three-way tie for second place: Barkin, Plotkin, and another rising star, Joon Pahk.

On Sunday, there was one more puzzle to determine who would make it into the three final spots. Barkin and Plotkin finished ahead of Pahk, and the finals were set. The finalists took their place on the stage, ready to fill in the grids on big whiteboards in front of the expectant crowd. (They wear noise-canceling headphones so they can't hear the audience or the color commentary, which was done this year by Greg Pliska and Peter Sagal.) This was Plotkin's first time on the stage for the Division A Finals, but Barkin was an old hand, having made the cut four times — including in 2014 and 2015, both times finishing in third place behind the twin titans of Feyer and Hinman.

Plotkin didn't end up faring well on the championship puzzle (a super-tricky offering by Mark Diehl), though no one doubts he will become a familiar fixture in finals to come. It came down to a dogfight between Barkin and Feyer, and Barkin managed to finish first, with an incredible time of 7:49, almost a minute ahead of Feyer. Barkin's triumphant finish was met with huge cheers and a standing ovation from the crowd. You can see the thrilling ending in this video. (Barkin is on the left of the stage, Feyer in the middle, and Plotkin on the right.)

Or if you just want to enjoy Barkin's moment of victory, here's a Vine!