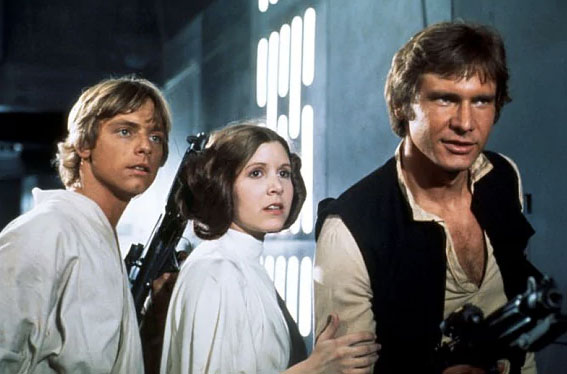 I don't want to date myself, but when the first Star Wars movie came out—in the prehistoric era of 1977—I was alive, though Yoda-sized. Star Wars has been a constant of my life, echoing some of my own ups and downs.

When I was a wee youngster, the original trilogy provided hours of distraction and entertainment via the movies, toys, posters, bedsheets, magazines, tie-in comic books, and everything else related to this mythological marketing megalith.

When childhood faded and those terrible, horrible, ungodly prequels came out, I was an adult and couldn't rely on The Force anymore. I would have to seek more mature entertainment, such as Batman movies.

But in recent years, as I creaked into middle age, the Star Wars franchise has made a comeback, with The Force Awakens, a glorious return to form, and Rogue One, yet another bland sequel. Hey, you can’t win them all.

Star Wars launched plenty of words—like Jedi and Wookiee—but it also made use of existing words, giving them a new spin, and a new force, if you will. The following words will serve you well in any galaxy.

Check out our extended list of Star Wars words here.

galaxy
I wish I could remember when I first learned this word, because it is one of the coolest in the cosmos. I may have learned it from the famous opening crawl of Star Wars: "A long time ago, in a galaxy far, far away…" Galaxy is part of a sequence of increasingly larger cosmic stuff we're part of: planet, solar system, galaxy, universe. A galaxy contains a whole bunch of solar systems, each of which has a sun and some planets. If that doesn't sound unfathomable enough, who knows how many galaxies make up the universe. Let's not even get started on the multiverse. Reality is a trip.

force
As the old joke goes, the force in Star Wars is like duct tape: it has a light side, a dark side, and it holds the universe together. In our universe, the word force is a broad term for various types of strength and power. An anvil falling from a great height has a lot of force. Employees are called the workforce, and if you have a lot of them, you can get more done. When countries go to war, they've decided to use force instead of diplomacy: that force might include the air force and other armed forces. Forces get stuff done.

destiny
In the original trilogy, Darth Vader tried to convince his son Luke that the farm boy's destiny was to rule the galaxy with Dad. Someone's destiny is their fate. If something is destined to happen, then it has to happen. People who believe we have no free will and everything in the world is pre-determined believe in predestination. A lot of people feel like it was their destiny to meet a spouse or have a certain job: these are often the kind of people who like to say "Everything happens for a reason." Other people think that's a big bag of horsefeathers.

empire
The bad guys in Star Wars are the empire—the galactic empire. This isn't a sloppy word choice, since the leader of the empire is an emperor—excuse me, THE Emperor. With his repressive regime and freaky lightning shooting out of his fingertips, the Emperor is not a contender for the Star Wars equivalent of the Nobel Peace Prize. Empire was originally a borrowing from French and refers to a realm or territory with an absolute ruler: an empire is the opposite of a democracy. Emperors, who are a lot like dictators, don't have to bother with pesky elections. Another Star Wars word refers to empire: imperial. In addition to referring to an actual empire, things and people described as imperial are majestic, commanding, or high-and-mighty.

alliance
The good guys in Star Wars are part of the Rebel Alliance—a loose association of the crumbling democratic Republic and various freedom fighters. An alliance brings together different people and factions, like the Allied Powers in World War II. An ally is a friend you can count on. Alliance gained popularity thanks to reality TV shows where characters make alliances: secret pacts designed to ensure their survival and crush other contestants. When you're in an alliance, you have friends—and usually enemies too. That's why you needed the friends in the first place.

clone
Do you love yourself? If you said "yes," then you should become a genetic engineer and make yourself a clone. (Note to self: Check to see if this is what genetic engineers typically do.) A clone is a genetic copy of someone: clones look exactly the same, much like identical twins. The stormtroopers in the first three Star Wars movies (and those execrable prequels) were clones. In fact, they were a clone army. Hey, if you can't recruit an army of jackbooted thugs, why not grow them in a petri dish?

So may The Force be with you on May the 4th, even if you dress your poor dog up like an Ewok. Actually, if you have a Shih-Tzu, you should absolutely do that. They look as perfect as Yoda in a swamp.