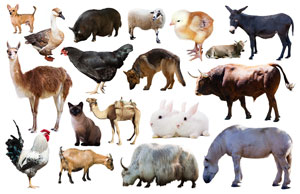 There's something people often say after making a mistake or giving into temptation.

For example, if I spelled someone's name wrong (something I do with alarming frequency) or ate an entire pint of Ben & Jerry's in one sitting, it would be quite logical for me to exclaim, "I'm only human!"

But not everyone is human — specifically our friends in the animal kingdom. There's a plethora of adjectives specific to everything from goats to snakes. Here's a look at words for critters and how some of them are used beyond their particular beasts.

For more, check out this list: A Lexical Zoo of Animal Adjectives

anserine
If you're familiar with the old-fashioned term silly goose, then you'll understand this term, which applies equally to geese and silliness. A 1607 use collected by the Oxford English Dictionary (OED) shows geese haven't been held in high esteem for some time: "He hath in his gagling pamphlet in this one propertie imitated the swanne, to sing out his owne shame and confusion; in all others parts bewraying his anserine follie." This is a word that deserves a comeback, given all the anserine behavior in the world. By the way, the synonym goosish has been around longer than you'd think: it's been recorded since the 1300s. Another OED example, from 1863, contains two animalistic adjectives: "The droll carvings of asinine preachers and goosish congregations."

aquiline
Around since the mid-1600s, this term has two related meanings. It means all things eagle-y — though I apologize to the eagle for using such an offhand, unmajestic word of my own for this imposing bird. Aquiline can also apply to the distinctive hook or curve of an eagle's beak. This term is often used to describe human noses that have a strong curve, but remember what your mother said about commenting on someone else's appearance, OK?

asinine
This word for foolish behavior is one of the most transparent animal words, since it derives from asses: in other words, donkeys, who have never been applauded for their sophisticated behavior.

canine
This is my favorite word of the bunch, since I am a dog person — which is not a euphemism for werewolf. I have a rat terrier, but I love poodles, Chihuahuas, pugs, Great Danes, and even pit bulls. Sometimes this word is used for doglike behavior in non-dogs, such as a steadfast person's canine loyalty. A fun and obscure term is canine letter, also known as the dog's letter, which is R, because dogs tend to go arrrrrrr or grrrrrrr when they're in a huff.

feline
I don't want cat lovers to be excluded, so here's the cat equivalent. Feline can refer specifically to cats or to the broader cat family, which includes panthers, tigers, and lions, oh my. You can use feline to describe cat-like behavior, appearance, websites, paw prints, or anything else that's catty.

lupine
Dogs are closely related to wolves. Genetically, they're very similar, though the domesticated dog and wild wolf couldn't be more different in terms of which you'd rather have as a babysitter. But wolves aren't canine: they're lupine.

piscine
Around since the 1600s, piscine has been used in all sorts of fish-related contexts. In the 1816 book The Origin of Pagan Idolatry by George Stanley Faber, the term describes a deity of the sea: "Derceto was the piscine ship-goddess of the Syrians." In an 1854 edition of reference book Orr's Circles of the Sciences, the term applies to a skeletal pattern, specifically, "The piscine modification of the vertebrate skeleton." My favorite piscine thing is sushi. Mmm, sushi.

porcine
This word is a few letters removed from porcupine, but that's just a coincidence. If you notice the similarity of porcine and pork, it'll help you remember the meaning of this term, which describes pigs, who are also called hogs and swine, which are fightin' words if you apply them to people. Come to think of it, so is pig.

serpentine
This term, loosely speaking, means snake-y, in all senses. A long, winding staircase could be called serpentine. The online dictionary Wordnik collects a similar example from the book Through the Grand Canyon from Wyoming to Mexico: "Our Sunday camp was beside what might be called a serpentine curve or series of loops in the river." A more diabolical sense is defined dramatically by the OED: "Having the evil qualities of the serpent; pertaining to the Serpent as the tempter of mankind; diabolical, Satanic; devilishly wily or cunning." An example from William Hepworth Dixon's 1873 book History of Two Queens is unflattering to two species: "With serpentine deceit, she said the King was cheerful in his trials." Then there's serpentine verse: a line of poetry beginning and ending with the same word, which sort of resembles a snake eating its own tail. There's also a mineral called serpentine.

Animal adjectives are a lively zoo of terms, whether used literally or metaphorically.