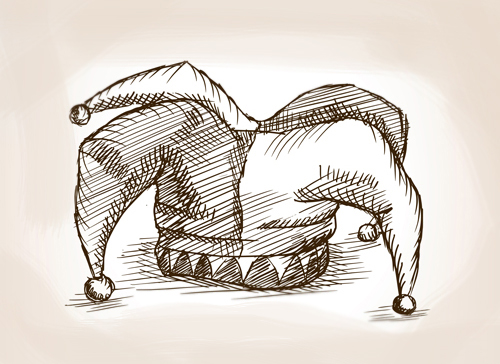 April Fool's Day is the prankster's favorite holiday, but it's not just about tricking your most gullible friends on Facebook.

We tend to think of fools as the people who get fooled, and the original meaning did refer to simpletons and dum-dums. But another meaning is key to April 1: the sense of a fool as a sharp, clever, professional expert in fooling, joking, and pulling other shenanigans.

This more respectable sense of fool is prominent in Shakespeare. In the court of a king, a fool wasn't an idiot or doofus: he was a truth-teller. As demonstrated in King Lear, the fool has license to tell the king hard truths, which were easier to swallow thanks to humor. Every comedian who attacks the powerful is a fool in the same sense, especially politically minded jokesters like George Carlin, Jon Stewart, and Samantha Bee.

So as you navigate this rubber chicken of a day, take a moment to remember or learn some relevant terms. Check out our April Fool's List for twenty words that might prevent you from being a risible buffoon.

prank
A prank is somewhere between a joke and hoax. If you call your friend pretending to be an FBI agent and say, "We know what you've been doing. Agents are on their way," that's a prank call. Someone who likes to play pranks is a prankster. This word is probably even more applicable to April Fool's Day than fool, since most of the jokes are basically pranks. Back in the 1500s, this word was far less innocent, as the Oxford English Dictionary defines it as "A malicious trick; a wicked deed; a deception or scheme intended to harm, a hoax." Today's pranks are usually more goofy than diabolical.

buffoon
In the 1500s, this word evolved from a French word for a jester:  buffoons paid the bills by making jokes, juggling balls, and performing other lowbrow feats. These days, a buffoon is far from an entertainer, though they might provide entertainment unwittingly. We tend to call someone a buffoon if they make us laugh at them, rather than with them, as they say. Since the 1600s, buffoonery has been a common word for laughable antics.

risible
Speaking of laughable, here's a synonym. Risible things are ridiculous, ludicrous, and preposterous. The original meaning was a little different, referring to people who are capable of laughing or who often laugh. A giggling teenager would be considered risible in that sense, but the word gradually shifted from the laughers to the stuff that makes them laugh. Using risible in English class would definitely be admirable.

cunning
To trick someone on April Fool's Day, you have to be cunning. This is a word to describe the tricky and sly. When cunning first turned up in the 1300s, it had a more elevated sense of smartness, referring to expert knowledge. The word branched in many directions over the years, including a meaning applying to English shamans, who were known as cunning men and cunning women. In the 1600s, the sense of cunning as crafty, sneaky, and a bit evil-genius-y emerged: Shakespeare used this sense when he described a "cunning fiend."

jest
To jest is to joke, though jest sounds fairly archaic these days. This word has a long history: it first referred to a notable deed or action. By the 1500s, jest had moved from referring to noble adventures to poking fun of people who talk about their supposedly noble adventures. The term also began referring to jokes and anything funny. A person who jests is a jester: a rare word for the butt of a jester's jibes is jestee.

idiot
The always popular term idiot has had a wild history, sliding between slang, medicine, and the law. As far back as the 1300s, it was a word for a fool or bumpkin, and it evolved meanings specific to the uneducated, including layman. Sometimes idiot has referred to fools in the sense of jesters. In the 1400s, idiot took on a legal and psychiatric sense, meaning someone with a low IQ. Far removed from medicine these days, this word remains prominent in the "X for Idiots" book series and as a descriptor of anyone who, as my grandpa used to say, lacks the smarts God gave a brick.

quip
A quip is a quick, witty, humorous remark. Movies are full of quips. One of the most famous was improvised back in the stone ages, during 1980's The Empire Strikes Back. During a tense moment, Princess Leia told smuggler-turned-rebel Han Solo, "I love you." Harrison Ford improvised the next line for Solo, quipping, "I know." Any time you've made the perfect comeback or amused your friends with a funny observation, you quipped. Unfortunately, April Fool's Day isn't usually about wit and quips: it's more about trickery, deception, and flat-out lies.

So keep your nonsense detector and secret decoder rings turned up to 11 on April 1, when everyone and their uncle will be trying to pull the wool, and the whole sweater, over your eyes.

Be especially careful online. April 1 is the one day all year when you can't trust everything on the internet.