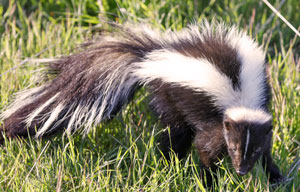 Can you smell what the calendar is cooking?

Probably not, unless you're an aficionado of strange holidays. The latest holiday no one gets off from work is National Fragrance Day — March 21. I wonder if perfume and cologne companies make a bundle on that day? After all, those are the most common smells people pay through the nose for.

In the spirit of the smelliest of occasions, here's a look at some odor-related words. Even if your schnozz is plugged up, you should be able to breathe in the lexical bouquet of these stinky words.

aromatic
Something aromatic has a distinctive, strong smell that is usually quite positive. Some people light incense because it's aromatic. This term is closely related to aroma, a fancier, more positive word for a smell.

fragrant
Since the 1500s, fragrant has been tossed around as a word for smells that are far from hell. This synonym for aromatic describes anything that smells as sweet as a flower dipped in chocolate. A pleasant smell is a fragrance. People often refer to perfumes as fragrances, because they are (at least in theory) very pleasing smells.

reek
This four-letter word isn't obscene, but it's definitely a strong word. When something reeks, it doesn't just stink: it stinks to high heaven. It stinks on an Olympic level. It "stings the nostrils," to borrow a phrase from Ron Burgundy, who got a whiff of Brian Fantana's horrendous cologne Sex Panther in Anchorman: The Legend of Ron Burgundy. The word reek wasn't used, but it certainly applied to a situation that led Ron to say, "Brian, I'm gonna be honest with you, that smells like pure gasoline." Fantana soon had to be hosed off by coworkers. That is a classic case of reeking. Why does reek mean reek? Well, the original sense referred to something burning, which does tend to stink.

stench
This is another word for smells of the offensive sort. You could easily say that Fantana's cologne produced a stench — a strong, horrible smell. You have to love the Oxford English Dictionary's (OED) definition: "A foul, disgusting, or noisome smell, a disagreeable or offensive odour, a stink.' Like some other smell-centric words, this term went metaphorical. If an overdramatic superhero detects the stench of evil, they might not smell anything with their nose. But a villain's underground lair has the stench of badness, even if the lab itself is full of flowers and air fresheners.

pungent
Pungent means something close to redolent: a pungent smell is powerful, sharp, and in your face, literally. That could be a good or a bad thing, depending on the particular odor. Sharp tastes can also be described as pungent, which makes sense, since smell and taste are as mixed together as corporations and governments.

odoriferous
When this word first popped up in the 1400s, it referred to pleasant, sweet smells. Over time, it became an equal opportunity adjective, describing all sorts of smells, good or bad, but generally ones that are strong and hard to ignore. The OED records a few fun variations, such as odoriferously and odoriferousness. Along with the more succinct odor, this family of terms is descended from Latin.

whiff
If you get a whiff of something, you smelled it — but just a little smell. If your face is so deep in a bouquet of flowers that you're practically eating them, that's a lot more than a whiff. A whiff is a little smelly sample of something, and this word can refer to another small thing: a hint. If a business deal has a whiff of corruption, there's a slight indication of something devious and illegal going on.

mephitic
Anything mephitic stinks and is usually a gas of some sort. An old, not especially successful word for a skunk is mephitic weasel, which would also make a fine band name.

I hope your nostrils aren't too inflamed to remember these words the next time you're writing a school paper or internet rant. A pungent vocabulary reeks of intelligence.

Learn these words and more with this vocabulary list: The Nose Knows