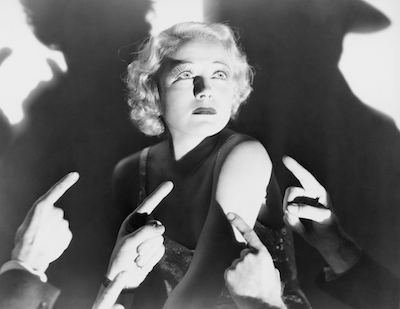 It just so happens that September 13, 2019 is also the first Friday the 13th of the year, which gives it another distinction: it’s National Blame Someone Else Day.

On any other Friday the 13th, many people will blame the number 13, ladders, black cats, the gods, and other alleged bearers of bad mojo for their troubles.

But on this rarer holiday, we celebrate all the other blaming (justified and unjustified) you can do, and if you're anything like me, you can do plenty. So let's look at some words that point the finger and go tsk-tsk.

To learn these terms plus a whole lot more, check out this list: Wasn't Me: The Lingo of Laying Blame

chasten
When you chasten someone, you chase them ten times. Just kidding. Chastening is a lot less fun than chasing, because you chasten someone for wrongdoing. A teacher could chasten you for talking in class. Your parents could chasten for you selling the dog to pirates. This word has a strong moral flavor to it, and you can also say you are chastened if you feel bad about misbehavior and won't do it again, swear to pancakes.

castigate
Castigate means "to reprimand in an especially harsh way." So, if you've ever been castigated, I'm sorry to hear it. Castigating is a hardcore version of the blame-and-shame game. It's miles beyond a simple admonishment. Like a lot of words, this one is first recorded in Shakespeare, specifically in Timon of Athens: "If thou did'st put this sowre cold habit on To castigate thy pride, 'twere well." In other words, "You should feel bad about being so full of yourself, dude."

admonish
This is one of the less severe types of blaming in this list. When you admonish someone, you're giving them a light scolding or a mild pooh-poohing at most. The noun form is admonishment. If someone in a movie theater says — "Could you please put away your phone?" — that's an admonishment. If they say — "People like you are bringing about the fall of society, dooming us to live in a lawless society, like Mad Max!" — that's more of a denunciation.

denounce
Speaking of denunciation, that's the noun form of denounce. This is a strong word for serious blame or disapproval. You wouldn't denounce your brother for eating the last cookie. Well, maybe you would, but generally denouncing is saved for more serious violations. When a person or group says or does something awful — such as racist comments — politicians and other public figures are often expected to denounce the culprit.

reprimand
A reprimand is a statement of disapproval, often an official one from a teacher, supervisor, or other person in authority. Parents blame children in many ways for many things, but they aren't likely to issue a reprimand, because a family isn't an official organization (unless it’s a crime family, I guess). Reprimands are statement of sins and transgressions that go in your official record, which could eventually mean suspension from school, loss of a job, or demotion in the military.

rebuke
Another word starting with re- has a similar meaning: to rebuke someone is to reprimand them, usually in an official, sometimes public, way. This word has been around since the 1300s, and its meaning can be similar to rebuttal. A rebuke is a rebuttal with some shame on top.

chide
Chiding is a little less serious than rebuking, and a lot less official than reprimanding. Chiding is closer to scolding and a little like nagging, and it can be passive-aggressive. Teachers and parents are great fans of chiding their charges. A chide could be, "You forgot to do your homework again?"

implicate
To implicate someone is to suggest their involvement in something, and that something isn't usually a legal thing. This word comes up a lot in legal and criminal language. If someone is implicated in a bank robbery, they've been linked to it in some way. Implicate is related to imply, which means to suggest something without flat-out saying it.

Learning these words won't necessarily keep you out of trouble, but I can promise you one thing: no one will denounce or rebuke you for your improving your vocabulary.