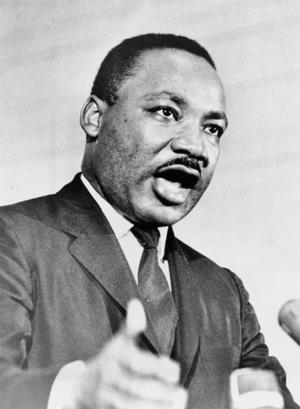 Martin Luther King Jr. was a true master of words, using vocabulary as a weapon in his struggle to guarantee the civil rights of African Americans. What better way for teachers and students to celebrate Martin Luther King Jr. Day — and prepare for Black History Month in February — than with resources on Vocabulary.com that help to illuminate the power of his words.

The following Vocabulary Lists help students properly appreciate Dr. King's words and those that he inspired.

We’ve also created a Worksheet that can be given to students as an exercise in discovering the metaphors in perhaps his most famous speech.

And in this Lesson Idea, a single word Dr. King used — in this case, oasis — demonstrates why his language is still so powerful today.

Planning for Black History Month in February? Keep these other vocabulary resources in mind:

Vocabulary from the Harlem Renaissance: Check out new vocabulary lists designed to unlock Harlem Renaissance primary sources materials, including an essay by the first African American Rhodes Scholar Alain Locke, "The New Negro," a poem commemorating the founding the Harlem Renaissance, "To Usward," vocabulary from a song sometimes referred to as an African American anthem, "Lift Every Voice and Sing," Zora Neale Hurston's essay "How It Feels to Be Colored Me," short story "Sweat," and novel "Their Eyes Were Watching God," and the Langston Hughes poem "Mother to Son."