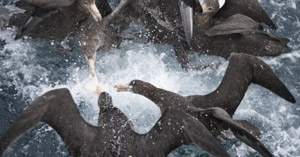 The internet — spoiler alert — is a land of exaggeration. The internet is constantly being broken — or engulfed — by the latest online firestorm. There is always bedlam, mayhem, tumult — and an occasional ruckus or brouhaha.

This group of chaos-describing words have, for the most part, a violent pedigree. Today's internet ruckus was likely a deadly event in the days of yore. This is a case of amelioration, a common process by which words become softened in meaning over time, like the much-maligned awesome. Once upon a time, the word was reserved for the truly awe-inspiring and gobsmacking. Today — and for some time — it is merely a synonym for cool.

Speaking of cool, words like havoc and tumult certainly are: they're full of punch and power and hyperbole and hype. They can still describe the oldest sense of mayhem (see below) or just any wild situation. So let's dive into a disorderly group of words that are appropriate for discussing both petty and primordial pandemonium.

Learn these and other words for utter chaos with this list: Mayhem! Chaos! Pandemonium!

mayhem
These days, mayhem tends to be used broadly for any sort of chaotic situation, but its origins are more specific and criminal. The Oxford English Dictionary suggests mayhem is a variation of maim. The first sense, found since at least the 1400s, is defined as, "The infliction of physical injury on a person, so as to impair or destroy that person's capacity for self-defense; an instance of this." By the 1800s, it had broadened to cover violence in general, but it's not till the twentieth century that the word morphed to cover a chaotic brouhaha. On the TV show Sons of Anarchy, a euphemism for ordering a killing hearkened back to the original sense. If someone were to be killed, they would "meet Mr. Mayhem."

upheaval
Originally, this word — which has "heave up" in its bones — was literal, referring to a geological movement upward, especially by a volcano. This geographical meaning was first found in the 1800s, but the non-literal sense is more common these days. There are many types of upheaval. If the citizens of a control are protesting against the government, there's social upheaval. If the stock market is unstable, there's financial upheaval. Upheaval is any a major sort of disruption or disturbance.

havoc
The original sense of havoc is military in origin. As the OED dryly defines it: "orig. to give to an army the order havoc!, as the signal for the seizure of spoil, and so of general spoliation or pillage." This term has been often found in phrases such as "make havoc" and "play havoc," though I'm partial to the phrase "wreak havoc." A famous variation appeared in Shakespeare's Julius Caesar: "Cry hauocke, and let slip the Dogges of Warre." From this sense, the term made a short hop to meaning total destruction, and this meaning is still found today, along with softer meanings. A UN News headline invokes the devastation-centric sense: "UN chief concerned over havoc of Typhoon Mangkhut in the Philippines." But a New Bern Sun Journal article — ironically, about Hurricane Florence, which unleashed violent havoc — uses the softer sense: "Florence causes scheduling havoc for athletic directors." I'll take scheduling havoc over hurricane havoc any day.

bedlam
Originally another name for Bethlehem, bedlam took a turn toward chaos when it was used a nickname for The Hospital of St. Mary of Bethlehem — a home for the mentally ill. Language hasn't always been kind to people with mental illness, so terms such as madhouse, insanity, and bedlam have often been used to describe general disorder. From the 1600s on, bedlam was used to mean any madhouse, then as a term for insanity in general, whether clinical or colloquial.

tumult
This word, first found in the 1400s, is defined by the OED as, "Commotion of a multitude, usually with confused speech or uproar; public disturbance; disorderly or riotous proceeding." A tumult is like an upheaval with a touch of bedlam.

ruckus
This is similar to tumult, but a little softer in meaning. If a parent hears their children fighting over the remote control, they might say, "What's the ruckus?" A ruckus can be any noisy, unruly situation.

brouhaha
Fact: Words created by reduplication are the funnest words. Want proof? Consider words such as helter-skelter, mumbo jumbo, fiddle-faddle, and loosey-goosey. Reduplicative words can alter the initial consonant (namby-pamby) or the vowel sound (twiddle-twaddle). They can also simply repeat a whole word or sound, as in no-no and bye-bye. Brouhaha has that type of reduplication, doubling ha to create a word for a restaurant-quality hubbub (another reduplicative word).

pandemonium
Speaking of fun words, few have a fun quotient higher than pandemonium, though the origin wasn't especially conducive to a good time: since the 1600s, pandemonium was a term for hell, specifically the capital of hell. Gradually, the word morphed from the abode of evil — which is presumably not an orderly locale — to a word for any sort of whoop-de-do or ruckus.

Please use these words the next time you cry havoc or pandemonium breaks out — mayhem is no excuse for a boring vocabulary.